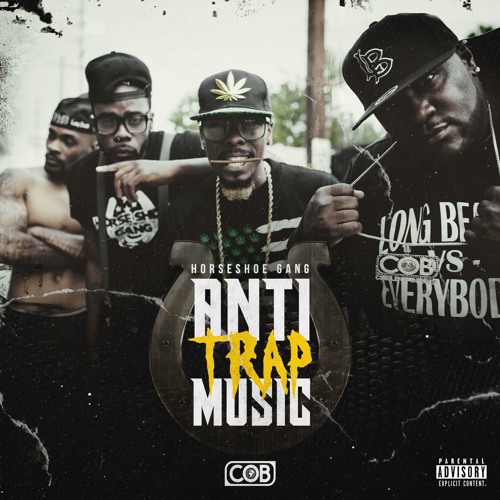 The quartet of Demetrius, Julius, Kenny, and Dice represent the last of a dying breed in Hip-Hop right now: the rap group. One listen to the Horseshoe Gang and you can hear why West Coast luminary KXNG Crooked took them under his wing. With their latest album Anti-Trap Music, they’re looking to show the game that there is something to be said for integrity.

Part of the appeal of West Coast Hip Hop is that it’s brash, in your face and to the point. The Crooked I featured intro shows just that as the first verse opens, “This ain’t trappin’, this is rappin’/if you the captain of the ship then we the Kraken”. Throughout proclamations of “We tryna make harder shit than N.W.A.”, the rap troupe hold their own as they bully the dark, pounding bass with their C.O.B. Leader.

Perhaps the best part of the album is how the crew is able to compliment each other’s flow and trade bars as best shown on “I Want” and “Who’s the Best Rapper”. The group puts on a clinic for “Crooked I Robot” as they flawlessly dabble with the treacherous, fast fire flow we’ve come to love from Crooked I. The West Coast coalition is also able to strike gold with “Out of Touch” as they display their topical versatility and lambaste MC’s who boast about the worst parts of the Black experience with lines like, “I grew up around hella niggas coppin’ that raw, my neighbors walking around with that Bobby Brown jaw/I think that’s why I’m confused, I’m bemused, I’m perplexed how niggas rap about drugs but never ‘bout its effects”.

However, where the album shines in flow, it lacks in overall appeal. Even with its ambitious title, Anti-Trap Music doesn’t truly offer a palatable alternative production thrill to counter the trap sound the collective is looking to overthrow. Tracks like “Poverty Slogans,” with its sticky drum kit attack and the satirical “Broke Ass Nigga” are severely out of place, serving as filler on a record meant to challenge the status quo of popular Hip-Hop.

For students of the style, Anti-Trap Music will prove worthy of the listen as the West Coast MC’s are able to effectively play with a variety of different flows. For those looking for an artistic approach and creativity, it might not be your bag. Anti-Trap Music simply lacks the ability of maintaining the rules of engagement throughout. A valiant effort but the next Horseshoe Gang album needs to pick up the conversation and progress it forward to the next level.