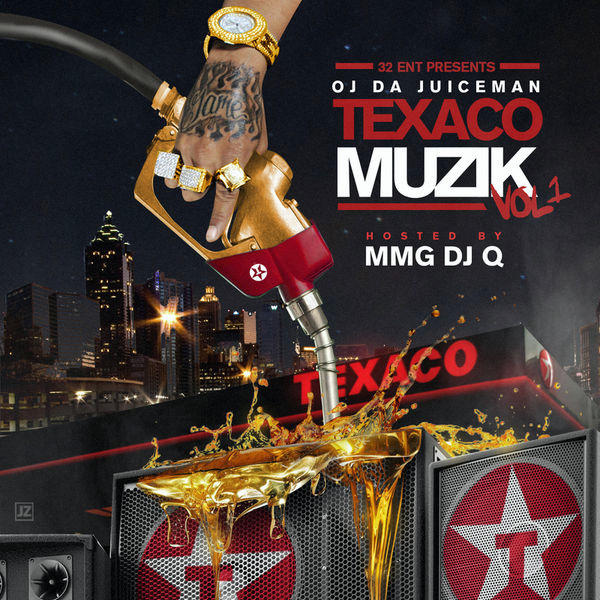 OJ Da Juiceman is apart of an exclusive club of has been rappers who emerged from the mid-late 2000s ringtone era. By now, sir Otis Williams, Jr. is nearly a decade removed from commercial success brought on by “Make Tha Trap Say Aye.” The single became popular enough to chart decently and established a few things. Alongside predicting the future production potential of Zaytoven, the single became one of the first early examples of Gucci Mane’s artist scouting abilities. Following the flop of his major label debut The Otha Side of the Trap and fallout with 1017 Brick Squad, Da Juiceman started his own 32 Entertainment. Since then, he’s dropped tons of music that have gone relatively unnoticed. If Texaco Muzik is any indication of the past several years of releases, the lack of notoriety is understandable. One would think a mixtape released with Maybach Music Group’s DJ Q, but the brand’s aspiration of quality is overwhelmingly missing. That also extends to the mixtape’s horrible mixing quality. For something that begs for a trunk rattling experience, the volume levels seem off.

The “until it sticks” idea has worked in his favor in producing worthwhile singles including “No Hook” and “Mathematics.” Texaco Muzik, unfortunately, misses even those moments outside of the Metro Boomin’ produced “Nobody,” “6-4” featuring Scotty ATL and “U Aint Who U Say U Is.” Scotty ATL spits the best bars lyrically on the project, the other two tracks are the serviceable turn-up tracks. Thankfully, those who enjoyed the cult classic videos featuring of Da Juiceman spitting his adlibs might enjoy that aspect for shits and giggles. Sure, the project should get spins in a hood hole-in-the-wall spot, but should find itself overshadowed by Gucci’s older pre-prison material or newer joints from the likes of Peewee Longway and Young Thug. Everything else features overused or outdated bars about Atlanta Hip Hop’s favorite illegal pastime. Texaco Muzik wears those rudimentary themes on its sleeve through tracks like the Chedda Da Connect assisted “Water Whippin” and “Trapping With Authority.” Ten years ago, most of these track titles would have likely appeared on oversized T-shirts with General Mills mascots. Also, over twenty years later, the usage of Menace II Society references in Hip Hop feel redundant and “Hurry Up and Buy” is further proof. Rap aspirations of O-Dog at this point and time just sounds lame.

Before Texaco Muzik comes to a close, there’s a fairly touching moment in “Momma Said” where Da Juiceman gets fairly introspective about the parallels of hustling. Too bad, that’s the only moment where the mixtape feels human. Texaco Muzik should represent the “gas” that keeps the dope fiends or fans wanting more. The problem is the unleaded fuel from this gas station is more likely destroy engines than lure people back to the pump.