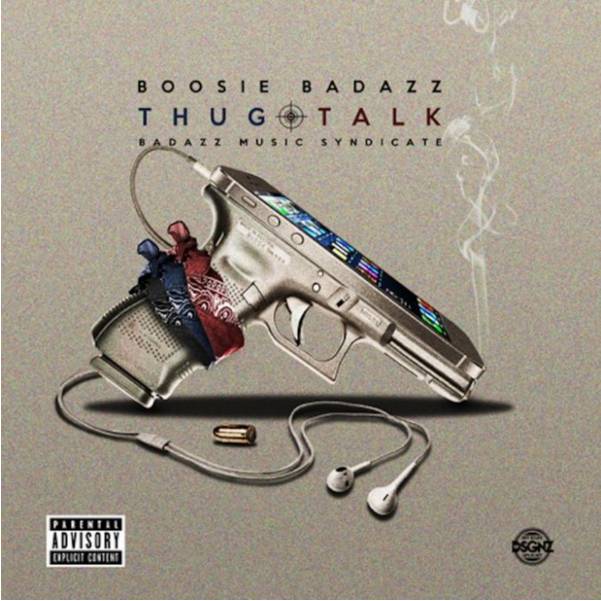 Boosie Badazz’s third full-length release in as many months, Thug Talk is an impressively swift follow-up to February’s Out My Feelings (In My Past), which itself arrived hot on the heels of In My Feelings (Goin’ Thru It) in January.

This near-constant flow of material since last year’s celebrated comeback album Touch Down 2 Cause Hell has captured the turmoil that has long loomed over the Baton Rouge rapper’s life. From growing up in poverty and losing his father at an early age to his five-year stint at the notorious Louisiana State Penitentiary at Angola and his recent battle with kidney cancer, this relentless work ethic against a backdrop of seemingly constant upheaval vaguely echoes that of rap’s other famously prolific troubled soul, Tupac Shakur. As Boosie himself explained in an interview in February, the world’s topics keep his musical drive firing on all cylinders.

Clocking in at just over an hour long, Thug Talk is another straight-to-the-point deep dive into that crazy world. The album opens with the title track, in which Boosie kicks a heartfelt ode to his family. “Finish U” then offers a dramatic, almost jarring, switch of pace from the thoughtful scene-setting moments earlier. It’s a full-on, frantic two-minute flurry of spiky invective as Boosie hangs out the window of his ride waving a .44 revolver while letting us know how he’s “known in the hood for setting it off with cold casualties.” Yet despite the verbal devastation, his focus always remains on the bigger picture, and throughout the album he tempers such raw nihilism with sombre, stark warnings about the perils of street life. It’s a strategy that works best on the superb “Wake Up,” an impressive addition to Hip Hop’s canon of cautionary tales where he summons the spirit of Ice-T’s ’89 classic “You Played Yourself” while reaffirming his status as one of today’s finest storytelling rappers: “Them Feds in town you witness, plenty niggas snitchin’/Shoulda stayed in school, fool, but you wanna be a menace/Sixty years yo’ sentence…/You distributed well, hung out with all the stars/Now they done took your crib, repo’d all your cars.”

The album’s production carries a similarly expansive approach. “Street Wars” is built around an ethereal, enchanting piano loop–reminiscent of composer Vangelis’ vast Blade Runner soundscapes–which brings a reflective, haunting tone to the hard-boiled raps, while “Menace II Society” is a brooding crime thriller which rolls out over a Blaxploitation-style beat comprised of filtered percussion and flutes.

“T.V.”, meanwhile, showers satire on the entertainment industry’s notoriously exploitative streak as Boosie examines an array of movies and TV shows as the flipside to his own everyday pressure cooker environment (“Boyz N The Hood, I was Cube in the drive-by/Smokin’ PCP I seen some shit that be on SyFy”; “I seen women get famous off they husbands’ shine/Then they shit on ‘em, so I seen The Real Housewives.”) Ostensibly it may also be a commentary on how rappers—desperate to declare their hardcore credentials–often borrow liberally from the Hollywood script.

Indeed, with notions of “realness” in Hip Hop more flimsy now than at any other time in the genre’s history, Boosie Badazz’s music remains commendably authentic, his recent strife imbuing his rhymes with an added potency and poignancy-which, ultimately, sets him firmly apart from the tired predictability of so many other plain vanilla thug rappers. For that, he should be saluted.