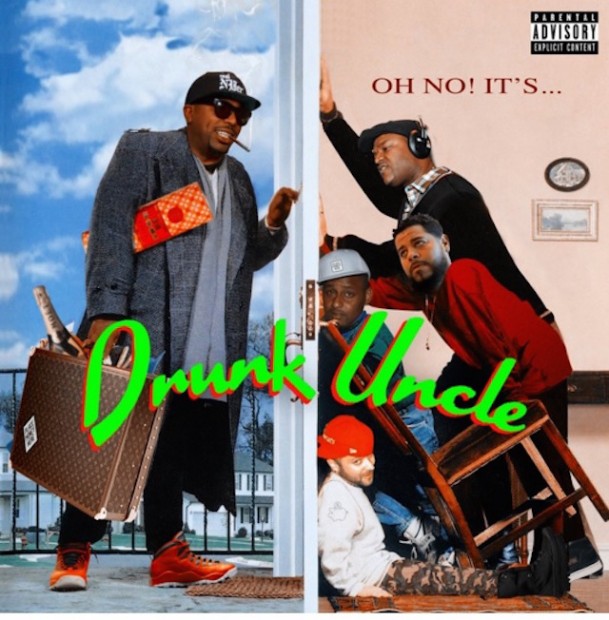 With his seventh solo project Drunk Uncle, the artist formerly known as Noreaga brings an all-star cast to boast his extensive network of today’s Hip Hop’s elite, old school legends, local hometown heroes, social media darlings and Hollywood celebrities to mark where his footprints have been left in the entertainment industry for the past three decades.

From the album cover’s reference to the John Candy cult classic film Uncle Buck to the twenty-three songs that the mixtape boasts, we know that the 38-year-old lyricist is eager to show that he’s just getting started off his third wind in the rap game. The album’s intro points to N.O.R.E.’s Latino heritage with a frumpy yet block-rocking salsa beat and phone call from a Colombian friend who needs guidance landing in his LeFrak home front, and segues into the first song “Queens,” featuring his borough brethren Royal Flush, Nature, and the venerable Kool G Rap. Depending on outlook, the track either comes off as retroactive or dated but it does harken on the late 90s era when East Coast gangsta rap and a hint of uptown R&B flavor ruled the airwaves. The album’s sound later doubles down on its more contemporary New York sound. There’s “Buckets” featuring NYC party wassailers Manolo Rose and French Montana who muse about popping bottles and models in the club, the predictably titled “Get Money;” a smooth ride with Swizz Beatz’s head-nodding hollow tunnel-echoed production that makes you whistle along and “Slime Season,” a collaboration with A$AP Ferg and Sandgram.

Other highlights include “Still Gettin’ It,” a bonafide banger featuring New York legends Fat Joe, Jadakiss, and Capone giving their dark-horse deliveries and ghetto fabolous content about how OG’s just wanna have all the fun, and “Giving it Up,” the most inflammatory song with his signature “what” drop to up the ante of the araabMUZIK energy of the track.

The majority of the project doesn’t warrant calculated digestion nor is it as cinematic as his past works (“Body in the Trunk”) or moshpits starters in (“Grimey”). And N.O.R.E. still isn’t as lyrically sophisticated as his Queens peers Nas, Prodigy, 50 Cent, or even his longtime partner in rhyme Capone (“Still got deals at the William Morris Agency/I network with them networks, don’t play with me”). Lengthy albums and mixtapes are susceptible to losing their luster with a litany of tracks being buried within the body of work. Skits with Slut Walk pioneer Amber Rose and NYC social media icon The Fat Jew giving drops are just rambling drops that make for easy skips. But other skits like the Abbott and Costello-esque hater debate, “The Interview” and his no-frills rhyme scheme, will make you laugh and forgive beats that sound like a grandiose attempt to upstage high-profile rappers like Killer Mike on “Make Em Pay” (“Levis jean suit, green kush, green coup, UFC style kid, Octagon/Nigga got kids like ‘Octa-mom’”).

The changes in N.O.R.E.’s life outlook are obvious (as heard on “Moments” which touches on a recent phone call from Jay Z acknowledging that he respects his artistry) and longtime fans will certainly have fun checking in with their Drunk Uncle.