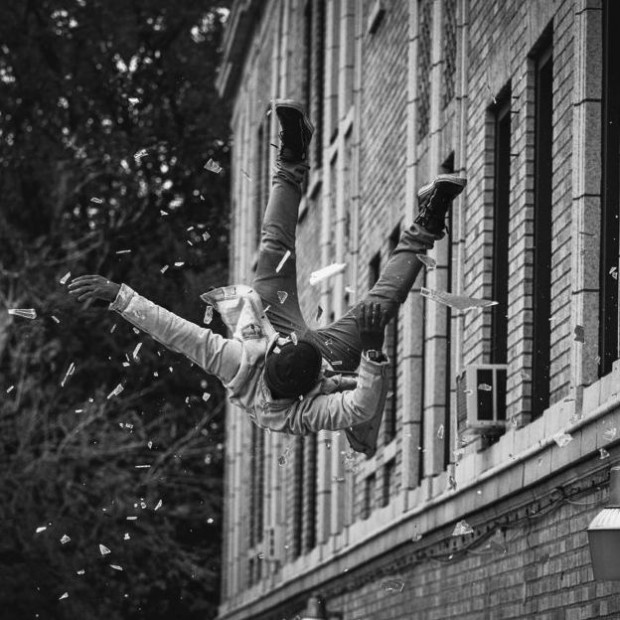 For over a decade, Nigel Holt’s creativity has helped him remain an integral part of the Chicago music scene. Formerly known as Hollywood Holt, his work blended various sounds, including juke and footwork. Affiliated with the Treated Crew, Holt – as he later called himself – has since worked on projects such as The Great Gatsby soundtrack as his sound and skills evolved. Now, under the moniker HXLT, he’s taken things a step further by venturing into the world of punk rock on his self-titled debut.

Released free of charge on a number of streaming services including SoundCloud, Spotify and Tidal, HXLT finds itself in stark contrast to most G.O.O.D. Music projects; an album filled with guitar chords and melodies rather than 808 drum patterns. Infusing a number of different genres under one roof, the 12-track project stands out mostly for what it’s not. Too bad the album leaves plenty to be desired; lacking in lyrical content and creativity, shining most when HXLT embraces his punk roots.

From HXLT’s first track (“Reaper”) – which quotes Blue Oyster Cult’s 1976 classic – until its last (“Together”), little energy is displayed. A mix of piano, cascading vocals strumming guitar and electronic musings that might delight the producers of the world, but is missing force required to move the average listener.

Not all artists need to display the exuberance of Method Man and Redman to make a hit, but for those whose music isn’t rambunctious, a level of passion needs to come across in order to convey a sense of emotion. Tracks like “Why,” which never quite makes it off the ground, and “Work It Out,” where HXLT replaces his earlier singing with a more conversational (and less melodic) tone, drive the point home.

Lyrics like “I want to kill, I need to rush I need the thrill. / Yes I need that to be bad, o see the edge and lean back,” on “Live To Death” might sound dramatic, but their delivery fails to bring conviction, causing the song to fall flat. The same goes for the aptly titled “Rock N Roll,” in which HXLT states, “I want to rock & roll your face off” over a slow, pulsating beat that, if not for the guitar in the background, would be more Usher than Led Zeppelin.

Lacking proper lyrics and matching delivery, HXLT instead relies on its production value as its driving force. A self-produced body of work that comes off somewhere between The xx and Toro y Moi, HXLT’s ability to blend indie rock and electronica is reminiscent of Danger Mouse’s work on Broken Bells’ After the Disco.

It’s also one of the project’s few positive notes, and much like the lyrical delivery, is widely inconsistent, featuring duds like the Styx makeover “Tonight” and highlights like the seemingly ‘80s-inspired “Moonrise” and the upbeat “Sick.”

Coincidently, the latter, which happens to be one of the album’s rare standout songs, is also one of HXLT’s few true punk rock tracks, though the juxtaposition of his screams of anger and the crooning overtop piano notes could have made for a far more interesting album should it have been utilized more throughout.

The same intensity can be found on the punk-tinged “Together,” which features Kathleen Hanna of Le Tigre fame, perhaps another reason the track has more of a rock & roll background. Unfortunately, these tracks are few and far between, making HXLT the latest casualty of the ambitious venture turned wayward passion project that G.O.O.D. Music has become.