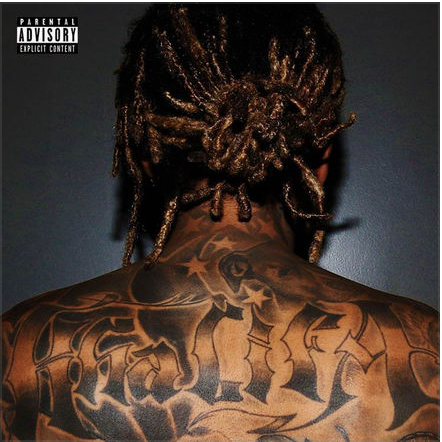 Wiz Khalifa just experienced the strangest album rollout of his career. For starters, Kanye West hijacked the wind from its sails with a string of tweets insulting the Pittsburgh native on a variety of subjects including his ex-wife, his child and quality of his previous albums. These tweets stemmed from Wiz’s comments about Kanye’s new album title (at the time) and how it unrightfully bit off a piece of Max B’s legacy. Warranted or not, this whole virtual feud erupted a mere eight days before the release of Wiz’s sixth studio album, Khalifa.

Although Wiz’s visibly forced smash hit “See You Again” didn’t make the final tracklist, what did make the 13-track LP are songs about money, stunting on haters, living lavish and of course weed. Those topics are all things we’ve come to assume he will touch on song in and song out. Wiz shows little hesitation in using the same bag of tricks showcased on the past five albums. On the bright side, the sound is friendly and familiar but after a while not seeing him flex any other musical muscles gets frustrating. On Khalifa though, he does do a little dabbling with some new tactics.

The album opens with “BTS” which is as cliché Wiz as it gets. “Humble beginnings/Rich ass endings/Pockets on swole/Big ass bingies/Started off losin’/Man it wasn’t choosin’/Stuck with my nigga’s/Now we all winnin’” is the first thing you hear when you press play – which is a good precursor to what the majority of album sounds like.

“Celebrate” with Rico Love isn’t much different but the production is so well orchestrated. In fact, most of the album’s production is extremely varied, every track having a different set of producers. Wiz uses everything from Jim Jonsin’s ambient snares to Lex Luger’s rattling trap drums to create Khalifa’s backdrop. Usually, this would make for an album that lacks cohesiveness but Wiz manages to bring out the instrumentation he sounds most comfortable on – even when he is trying new things.

“Call Waiting” is a shot in the dark that hits the target. The tropical, rhythmic serenade sounds like it would be played on repeat at a four star hotel in somewhere in Dominican Republic. Fans and critics alike have seen Wiz attempt the Auto-Tuned sing/rap combo in the past but this track is as clean as it is catchy. Traditionally, there is nothing Hip-Hop about this particular song and in a weird way, it proves to be one of the album’s best. “Zoney” is also a very honest and revitalizing song for Wiz; a track that has him walking through his past trials and tribulations. Seeing as his son Sebastian has a mini cameo at the end of the track, it serves as a father-son themed track as Wiz raps about his own dad with introspective lines like “Daddy sold dope but you would probably do the same thing/If I get $30K I would probably spend it on my wrist/Fuck these politics when these kids ain’t have a pot to piss/Fuck the promises, the shit I’m on is common sense.” These types of bars may come few and far between for Wiz but are refreshing nonetheless.

The biggest hurdle that hits this album is its lack of impact. While the handful of new-fangled tracks are well put together, Wiz shines brightest on a large scale singles that go as hard on mainstream radio as they do on your Spotify playlist. Anthem-driven choruses, crashing drums, pounding bass and charged up lyrics are all elements that fall right into Wiz’s wheelhouse; Khalifa doesn’t really have any of that. “Bake Sale” with Travis Scott attempts to fill this void but ends up sounding like a rougher version of “Antidote.” Making a relatable hit single is no easy feat but Wiz can’t seem to find it here.

On Khalifa, there isn’t much that raises nor lowers Wiz’s stock and after a couple more play throughs the album comes across as fairly average. Let’s hope his next project, Rolling Papers 2: The Weed Album, delivers an experimental edge with a single or two that he can run with.