The Foreign Exchange - Tales From The Land Of Milk And Honey 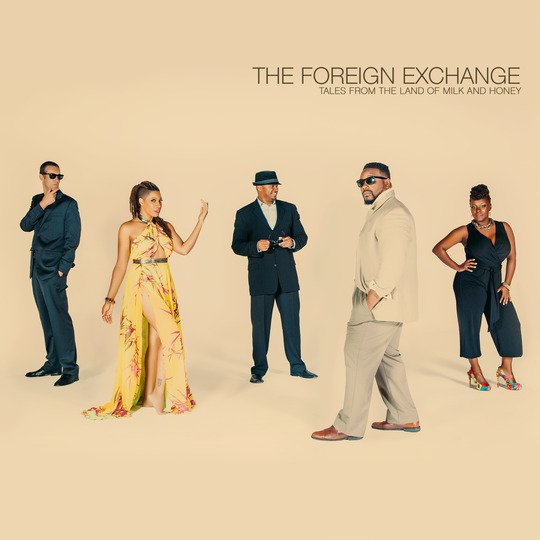 For years, The Foreign Exchange have flown under the radar of mainstream Hip Hop and R&B, a group that is perhaps too musical to be played alongside Chris Brown yet perhaps looked down upon by Hip Hop heads for being soft. Consisting of North Carolina underground supergroup Little Brother’s emcee Phonte and Dutch producer Nicolay, the duo has produced a catalogue that ranges between Hip Hop and jazz, soul and beyond, with a knack for intellectual lyrics and beats that can hit hard and smoothly soften, putting them in a category of their own.

Formed on Okayplayer’s message boards over a decade ago, The Foreign Exchange have stayed on the cutting edge of both Hip Hop and R&B, experimenting with the genres in a way that is less Kanye West and more Miles Davis. Their previous albums, including their 2004 debut Connected and their most recent work Love In Flying Colors (2014), are more fitting of concert halls than raucous crowds.

Their latest album, Tales From The Land Of Milk And Honey, offers up a similar vibe, from the opening clave notes reminiscent of a Latin samba, to the electronic piano chords and melodies of the project’s final track. Seemingly out of place in today’s music scene, The Foreign Exchange stay true to their sound and the notes of the past, and the result is an enjoyable listen throughout.

Tales From The Land of Milk And Honey starts with a beat that is a less Hip Hop version of Kendrick Lamar’s “These Walls” – though with fewer snare hits and more background singing. In fact, Phonte doesn’t enter until the 2:12 mark, joining the female vocalist to tell the tale of a perfect place “where love can do no wrong” as the fast-moving song races along. It’s not your grandfather’s jazz, but it’s far from today’s R&B.

Sticking to the script is far from a new ploy; in fact, it’s a method that’s been enacted by everyone from one hit wonders to music’s biggest names. But Hip Hop, while built largely on the sounds of the past, is always attempting to move forward, making originality a focal point. The Foreign Exchange found their Hip Hop niche long ago, with tracks like “Nic’s Groove” – a melodic mix of underground Hip Hop and jazzy undertones – building upon that foundation to create a broad and loyal fan base.

Since then, The Foreign Exchange’s tone has shifted, gravitating more towards R&B, at times emitting a gospel-like vibe. This became one of the group’s cornerstones, and on Tales From The Land Of Milk And Honey, it became the group’s main focus – even if it means facing displeasure from some of the group’s original fans.

Tracks like “Work It To The Top” exemplify Nicolay’s more creative side, involving synth, a group of background singers, Phonte’s crooning and more. The song sounds like it could be dropped directly into an earlier decade, with lines like “Shake your thing and work it to the top,” and the spirited, light lyrics are a welcome reprieve from the more outright, raunchy message of today’s R&B, carrying less anger (and far more disco) than today’s Hip Hop.

As Hip Hop changed around them, The Foreign Exchange evolved from a group that largely fit into the genre’s underground sect to a duo that seemed bent on reworking themselves into an R&B duo that defied that genre as well. Phonte, once known for his rapping, focused more on his singing. Nicolay, who once seemed like one of Hip Hop’s next producer prodigies, started to lean more towards music’s softer side. And today, The Foreign Exchange have become a full-fledged R&B group capable of engaging fans of all ages.

The lyrics harken back to days of old, with lines like, “Lay down your weapon, let’s just call it a truce,” marking a far cry from the lines of Frank Ocean or Miguel. Hip Hop still lives as one of the album’s many musical influences – most noticeably on the “one two, one two” of “Disappear” – but this is R&B, and The Foreign Exchange aren’t afraid to kick it old school.

With Phonte once again proving that his role as a singer is far from forced and Nicolay providing beats to match, Tales From The Land Of Milk And Honey is a work that showcases the rebirth of classic R&B in an age that may not quite be ready for such sounds. The beats display creative, modern production while the lyrics are more fitting of the genre’s past, and the combination of the two makes for a fun listen perfect for summer’s end.