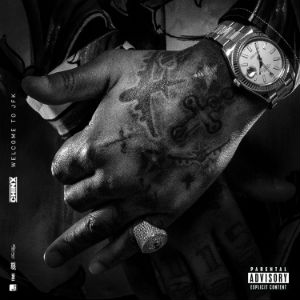 Posthumous albums are museum displays more than albums. Every lyric draws the magnifying glass closer and the album encapsulates a time period. Therefore, the body of work is no longer judged simply by its content independently but, time of its production. The Notorious B.I.G. had “Suicidal Thoughts” on Ready To Die, but it was not until his Life After Death months after he was murdered on March 9th, 1997 where his lyrics began to become eerie prophecies of a man so wrought with paranoia, it manifested in death premonitions. Chinx Drugz, the Queens rapper gunned down in his hometown back in May does not guide the listeners deep into his thought process on his debut album Welcome to JFK. Like the iconic Brooklyn emcee, Chinx’s posthumous album encapsulates the legacy and the man in a museum display for all listeners to dissect and examine; flaws and all.

Welcome to JFK plays like a quintessential transition album more than an introduction. One doesn’t hear a single bar rapped until the second song titled “Experimental,” an emo trap song ripe with disparate ambient sounds, thudding bass and melodic singing that sounds like nothing else on the album. Most of the album follows in a similar concept of experimenting with Chinx’s style. The synth heavy bounce of “On Your Body” is tailor made for summer cookouts and serious crossover potential. Chinx’s manager Biggs informed Karen Civil it “represents his growth as an artist” yet, was a “risk because it’s not the typical Chinx.”

Lyrically, Welcome to the JFK is pretty formulaic with Chinx rapping lyrics such as “cat in the freezer, that’s a cold pussy” on “Go Get It”  with the same temerity as if he murdered someone on a track. But, there are introspective and witty gems that saves this from being a monotonous listen. Stack Bundles appears on “Far Rock” and it sounds great hearing him flex his aggressive wordplay with lines like  “you playing yourself like suicide drills.” Chinx’s patented unapologetic wit that made “Feelings” a surprise 2013 hit is not completely submerged under the experimentation. “Yay,” with fire truck horns blaring, the album’s hardest drums and Chinx rapping “open up the trap and watch the smokers do the wop” recaptures the raw energy that makes Chinx so captivating. But, Chinx rapping “pray I go to Heaven before I go to hell” on the same song is a sobering reminder that this is more of a museum visit than a party.

The production is the biggest detriment to an otherwise good debut album. Chinx raps vehemently over wipsy piano chimes and baby wipe soft drums on “Go Get It.” The minimalist approach to the Ty Dollar $ign-assisted “The Other Side” sounds as if it was painting by the numbers in the “How To Make A Future Derivative” colorbook. When the beats match Chinx’s, you truly get a glimpse into what a beast the Far Rockaway native was developing into. “On Your Body” may be Chinx’s attempt at a commercial hit, but “Thug Love” is by far the most complete and replayable record on the entire album by a wide margin with lush vibes matching Jeremih’s wonderfully layered vocals for a song that was ready to dominate any and all summer cookouts.

If Welcome to JFK is meant to take Chinx Drugs to a national level, the song structures may be right, but the content shows Chinx was still in transition of fully realizing this aspiration. Two years ago, Rick Ross lost a lucrative Reebok endorsement because he “slipped a molly a drink, u aint even know it.” On album standout “How To Get Rich”, Chinx proudly raps “can’t nobody teach you how to put the molly in her drink so you can catch the vibe.” Even on “The Other Side,” which surely is destined to be in every club, Chinx curiously raps “hit your bitch with the Ray Rice/Jury looking funny in the daylight.” Is Chinx comparing his sex game power to that of an NFL player assaulting his wife or is this some sort of clever analysis of the court of public opinion’s unreliable judgements? We’ll never know.
Chinx’s first commercial album release is a freeze-frame of an emcee that “still sell in the school zone” but ventures into uncharted territory with mixed results. Chinx’s ambition was ready for the lime on the album closer “Die Young.” The most eerily prophetic lyric on the album appears on the album’s best song “Hey Fool” where Chinx raps “drive by hit the deck, shots licked and then I swerve off/murder’s the only topic/neighborhood is watching.” Welcome to JFK will forever shrouded in “What if’s,” even if Chinx’s management promises future projects. But, in the end, Chinx crafted a debut album strong enough to support springboarding him into creative areas we never did, and never will, see him reach.