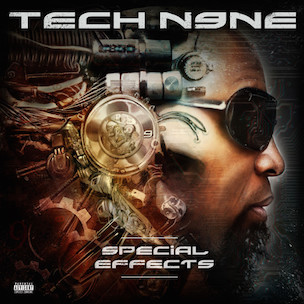 Tech N9ne’s career is a blueprint for any indie rapper trying to get to the next level. The 43-year-old rapper has released 14 albums prior to Special Effects — nine are solo projects, five are part of his “Collabo” series — and not to mention six EPs and one mixtape. Depending on how old you are, you probably got into Tech around Anghellic or Everready (The Religion) and have been loyal Technicians since. From All 6’s and 7’s to now, the underground mainstay, who often deals with darker themes in his music, saw the mainstream embraced him. However, his fans weren’t too happy with it.

The moment Lil Wayne announced that he wanted to work with Tech through an interview from Riker’s Island is when things started to change. New and curious fans wanted to learn more about him. His diehard fans thought he was selling out. “Tech will never go mainstream, mainstream will go Tech,” he promised on “Love Me Tomorrow.” Throughout the years, Tech never fully went mainstream, he just let them into his strange world. Bigger names slowly crept up on his projects: The Doors, Kendrick Lamar, Wiz Khalifa, and The Game all appeared on his last album Something Else. We all watched as his status grew during his career, even when Tech did little to change his style. It was a launching pad for the King of Darkness to experiment more with his influences of metal and rock—two genres he openly states as the crux of his music.

After putting out his neo-metal EP Therapy, Tech is really serious about becoming the epicenter of all genres. Special Effects can be described as a carnival of musical tastes, where 24 tracks are your attractions to indulge in different moods. It’s become a staple of Tech’s albums to add another layer for the listener to dissect, and this time he’s broken down the tracklist to represent certain days of the week. Given the circumstances Tech has endured this past year (his mother Maudie Sue Yates-Khalifah passed away from a long battle with lupus), the veteran emcee didn’t succumb to this loss by making a 808s & Heartbreak-type of album. Instead, he kept his spirits high and delivers a bit of everything we expected from him: party anthems, rapid-fire rhymes, and songs with crossover appeal.

“Aw Yeah? (interVENTion)” starts with “question for the maker and it’s ‘aw yeah?’ / This is the way it’s supposed to be huh?” In the same emotional spectrum as “Fear,” Tech ponders why injustice keeps happening around him — including a direct question to God about why he took his mother away. On “Lacrimosa,” he employs the same method to vent about his loss. “My mother left me, but her death ain’t okay with me / Still I’m praying for her spirit to stay with me.” And on “Shroud,” he addresses his problems with societal misconceptions by channeling the darkness that consumes him, in which he refers to it as “thick and oozing like lava.” The use of choir, eerie moans and orchestra strings has always made his messages feel heavier. It’s Tech’s take on the ominous presence of Michael Myers in lyrical form.

Tech’s 20-plus year career in Hip Hop has given him many opportunities to work with popular and newer acts. Special Effects has its fair share of high-profile collaborations with Lil Wayne, Eminem, E-40 and T.I., Corey Taylor (of Slipknot) and more. While it is exciting to see Tech alongside bigger names, these attempts don’t really push him to the status he envisions for himself. “Bass Ackwards” isn’t on the same caliber as “Fuck Food,” with Weezy delivering a lazy verse and Yo Gotti sounding out of his element. “No K” is Tech’s attempt at recreating the bounce of the Bay Area, but it sounds dated compared to fresher takes by Iamsu! and G-Eazy. And all hype aside, Eminem’s jumbled verse on “Speedom (WWC2)” is nowhere near the warp speed of “Rap God,” and feels less organic than intended. Even so, “On The Bible” featuring the reggae flare of Zuse and a standout verse from T.I. is Tech’s strongest, full of his trademark exceptional rhymes and bass-heavy beats. “Wither,” too, is a perfect storm of alternative rock, metal and rap that Tech strives to hit.

Special Effects will get recognition for Strange Music’s in-house producer Seven. He’s all over the album’s wide range of genre-bending songs that’s a mixture of Therapy’s hard edge meets Something Else’s cleanliness. Casual listeners — who are more familiar with his Hip Hop catalogue — will likely be turned off by the handful of straight-up rap records. His core audience, though, will revel in the album’s moments like the return of “Psycho Bitch” with a crazy storytelling verse from Hopsin over sinister production. The merge of psychedelic rock and aggressive raps on “Give It All” (featuring Audio Push and one of many highlights from Strange’s own Krizz Kaliko) finds Tech in his zone, especially when boasts about rappers sounding the same shouldn’t go unnoticed. “Worldly Angel,” his ode to his mother, wraps up the album on a somber note backed by a minimalist piano. So, all in all, Tech doesn’t do much to break new ground, true, but succeeds in creating an overwhlemingly consistent listen.