Red Pill - Look What This World Did To Us 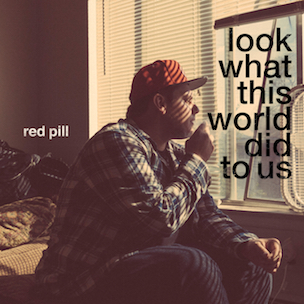 Where music often deals with the universal theme of standing strong despite suffering losses, Detroit’s Red Pill has practically made this his mission statement. Though he certainly takes pride in his ability to rap, his artistic craft takes on the greater aim of helping his fans get from one day to the next. The Kick (a 2013 release with his production partner Hir-O), documented his struggles with alcoholism, day job woes and family death, relatable topics to anyone with everyday problems. Often torn between a feeling of hopelessness and a refusal to give up, Ugly Heroes followed as a gloomy tag team exercise with underground veteran Verbal Kent and beatmaker du jour Apollo Brown. Here the pair of emcees stared further into the abyss of self-doubt weighed down by the economy and the hardships of Rap life.

Many emcees earn respect behind the smoke and mirrors of advanced lyricism and themes of remaining “true” to Hip Hop, while Red Pill takes utmost pride in baring his soul. A conceptual solo debut dedicated to lamentation, Look What This World Did To Us relies on introspection as its guiding light. The opener “Meh” is floaty while hard hitting (a reminder of J. Dilla’s technique) where Pill shows a tongue in cheek awareness about the themes he draws inspiration from.  Stereotyping himself in a most self-deprecating fashion while waiting on a pizza delivery, he muses “Obligatory line about me smoking / Obligatory line about me drinking / Obligatory line about some job and over thinking.” Much like with his career to date, this honest approach comes to define most of the album.

Finding peace within the chaos of his cluttered mind, Red Pill is intent on controlling his various moods and presenting them to his listening audience. The mellow “That’s Okay” allows him to reconcile flaws and make the most out of life as he says “I’m just trying to live authentically, respectably and find my own serenity.” On the flip side, “Rap Game Cranky” is an anthem for antisocial misanthropes, referencing the eccentric charm of his true to life drunken Twitter tirades. Reuniting with his slept on partner Hir-O, the soulful “Kids” explores coming of age and how the harsh strides of adulthood pale in comparison. Always looking for a silver lining to his cloud, Red Pill’s sense of optimism distinguishes him as a level-headed thinker.

As Kanye lamented on 808’s we’re (most of us) worried about the wrong things. And so Look What This World Did To Us finds Red Pill facing disappointment head on. “Leonard Letdown” cleverly personifies his defeatist demeanor as he says “I’m the final episode of Lost, the game freezing right before you beat the final boss” along with “I’m the feeling at the office up in Mello (Music Group) / Right after they signed this Red Pill fellow.” There’s a steady stream of discontent on Look What This World Did To Us, and the album glows in a sparkling green radioactive tinge. The half-life of existential angst is momentary, however, and as you listen the thing seems to wither before your very eyes to reveal it’s hopeful, vulnerable core. This is the essence of Red Pill’s sonic meanderings, wandering the sudtenland of post-post modernism’s lack of a cohesive, instagram-laden core. But it’s very difficult to point out what is wrong with something without taking on some of that muck yourself. To wit, wariness makes you wary, and without outright tackling the crux of the matter (the will to create your world rather than be simply subject to its whims) the music, while hardboiled and touching, circles around its own drain. There’s no doubt that Look What This World Did To Us is an acquired taste, favoring the lyrical, emotionally vulnerable and cerebral over the thoughtless Hip Hop that’s become so prevalent. So instead, Red Pill uses his voice to speak to anyone desperately seeking a way to feel better while navigating their way through heavier moments.