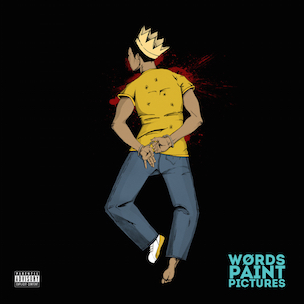 Where many of his peers fell off to the wayside (including most of the Justus League crew he started with), Rapper Big Pooh has maintained a hungry work ethic over time. A pioneer of Hip Hop’s online age as 1/3 of the now defunct Little Brother, his support to Phonte & 9th Wonder is overlooked yet crucial to the trio’s legacy together. Forced to carry his own career in the wake of LB going different directions creatively, Pooh has steadily lived his dream on his own two feet. As the most prominent feature on Kendrick Lamar’s 2009 EP, his place in the game is either an uphill battle or an ongoing marathon depending on your viewpoint. Perhaps both.

Words Paint Pictures is Rapper Big Pooh’s first outing with producer Apollo Brown and Mello Music Group, today’s answer to Madlib’s prolific catalog with Stones Throw Records.  In response to America’s current events, he has delivered his most socially charged work to date at a time when it’s most needed. Given the recent rise in tragic police slayings, the somber “Stop” examines the horrors of racial profiling that turns murderous, a fear often faced despite one’s complete innocence. Teaming up with his new label mate (Rap’s leading conspiracy theorist since the ‘90s) Ras Kass, “Eyes Wide Open” calls out President Obama and the United Nations for crimes against humanity. This newfound inspiration from Pooh is a welcome surprise as he directs his aggression away from battle raps toward thoughts of revolution.

Rapper Big Pooh’s greatest strength is his aggressive delivery that goes well alongside Apollo Brown’s dramatic production. However, the main drawback on Words Paint Pictures is it doesn’t sound distinctly different from anything either of them have attempted before. While adequate enough to fill a somewhat missing void, “Promise Land” is a head nodder reminiscent of Gang Starr with its message of unequal treatment for minorities. Where the original version sounds hopeless and grim, the project closes with Apollo Brown’s more soulful remix proving beats are what establishes the overall vibe regardless of topic. In the same vein, fans get to choose their preferred spin on “Augmentation” between the experimentation of  L’Orange (another one of MMG’s production wizards) and the album’s opener that is more straightforward.

Aging into a veteran having suffered the ills of industry politics on mainstream and underground levels, Rapper Big Pooh’s drive and command of emceeing remain adequate enough for long term listeners. Clocking in at just nine songs, Words Paint Pictures lacks full potency, but it’s aided by introspective moments like “How I Move,” which takes a look at the stresses of being a solo act and surviving a car crash. Left to practically fend for himself in the wake of his group disbanding, this alliance with the lesser known MMG is a respectable attempt at reinvention. With any hope, Pooh will continue to shine on his own without the influence of his more recognized former teammates.