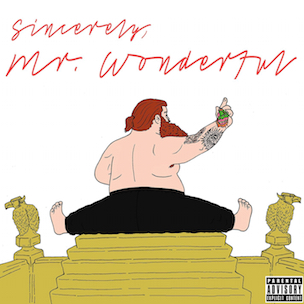 Action Bronson has grown into the character he drew up for himself. In 2011, shortly after the release of his first album, I saw him walking around a festival in Brooklyn, conspicuous but mostly unrecognized, a tiny blunt tucked behind his ear. Last year, at a concert in Philadelphia that was like many of his recent shows, he marched around a packed venue during his set and sang Billy Joel songs with fans. He also threw branded G Pens with his face etched onto them into the crowd. He’s come a long way quickly.

The Queens rapper’s new album, his first as a major label artist, keeps pace with his recent developments but extends some of the experimentation. Bronson is singing more, rapping a little less, and allowing lengthy stretches of instrumental space. It’s a combination that might alienate some of his rap-hungry fans but the transition is neither a surprise or a major label bait-and-switch. Tellingly and thankfully, the most out-of-pocket moves on Mr. Wonderful aren’t uncharacteristic appeals to radio but cases of its artist leaning further into the territory he’s been hinting at. Unlike the rest of his albums and mixtapes up to this point though, Mr. Wonderful is a multi-producer affair and it jumps around noticeably as a result.

A lengthy and random-but-with-a-moral interlude splits the album into lopsided halves, the first fulfilling Bronson’s straight-ahead rapper duties more directly than the longer second. While there’s no concept attached, there’s almost a sentiment of hanging out with two different groups of friends, romping around with Big Body Bes on the one hand—his adlibs are hall-of-fame worthy early on the record—and rocking out with Party Supplies on the other. Bronson’s charm is that he seems to fit in anywhere, a Blue-collar affability that channels a little more Billy Joel. On “Terry” he floats unrestricted over a dreamy Jazz guitar line Alchemist extracted, a winning combination that segues into an electronic rapture as a transition piece. The Noah “40” Shebib and Omen produced “Actin Crazy” relies on a warped, reverse-soundwave effect and horn stabs as fodder for a tranced-out banger. Bronson slows down for the occasion: “Opportunity be knockin’, you gotta let a motherfucker in … / Why you think I’m out here actin’ crazy? / Ma, I’m still your little baby.” Despite the hint of melancholy, Action is never far removed from his imaginative food and “Most Interesting Man In the World”-type boasts: “All I do is eat oysters / And speak six languages in three voices / It’s Adriatic Summers on the sailboat / Don’t even try to call I’m not available.”

Mark Ronson charms a Billy Joel sample into “Brand New Car,” an upbeat number that purposefully maintains the original’s essence. Joel apparently cleared the sample, which is pulled from the same album that carries the “Stiletto” break, after both artists hand wrote  a personal appeal and note of admiration. Ronson also serves up the album’s latest single, “Baby Blue,” a catchy piano-driven track with Pop appeal that finds Bronson singing a hook strung together with help from Zane Lowe. In character, he also rambles extravagances to try and make an ex jealous. Chance The Rapper’s verse on the song is personal and delightfully petty. “I hope you get a paper cut on your tongue,” he raps, and then, “I hope you happy / I hope you ruined this shit for a reason / I hope you happy.”

Later, “City Boy Blues” kicks off the more Bluesy and trippy jaunt of a B-side. The song is a live-sounding Prog Rock jam, a wonderfully frenetic jolt attributable to 88-Keys. Bronson’s singing is labored and a little strained though, shortcomings that aren’t isolated to the song and are a far cry from the ease with which he raps. “The Light In The Addict” was originally released as a Party Supplies record but fits here as a druggy reflection from the rapper. “Sittin’ first class, feelin’ like shit though,” Bronson raps, “Starin’ out the window with the mind of a schizo.”

It’s not a damning problem, but Bronson’s eclecticism plays out at the expense of continuity. On face value, the unabashed drama of the ‘80s Pop-Rock Party Supplies churns out for “Only In America” doesn’t belong on the same project as some of the songs mentioned above and not much effort has gone into making it fit. The album ends logically with “Easy Rider,” a Psychy, Harley-through-the-desert trip that channels the rapper’s charisma perfectly. Mr. Wonderful isn’t everything for everybody, but it seems to belong completely to Bronson. Whatever you take from it, he’d probably just say, “It’s me.”