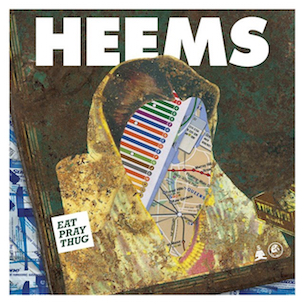 Rap has always been a voice of the disenfranchised. It doesn’t shy away from speaking for those without a medium. It hasn’t often been used as a mouthpiece for combating islamophobia, however, or the prejudice that plagues brown people of all faiths and nationalities. Those issues are being taken to task now thanks, in part, to Queens rapper Heems. Heems first rose to fame as a member of the group Das Racist, a three man satire troupe making joke Rap that was smart, incisive culture criticism but limited in the scope in which it could properly address sociopolitical issues. Eat Pray Thug is Heems’ first solo album (the group disbanded in 2012), and while it retains most of Das Racist’s signature wit it trades in jest for approachability, perspective, and reach.

Eat Pray Thug is a complex emotional study, a look at loss and change and the effects on the human psyche, and a dissertation on the intersectionality of racial identity and hometown pride. When the album isn’t grappling with being a targeted brown person it delves into failed relationships with the same kind of discontent. Heems himself has referred to the project as “9/11 & Heartbreak”, and that is an incredibly accurate assessment, but it’s a bit broad. More succinctly, Eat Pray Thug is unflinching commentary on post-9/11 xenophobia embedded in the personal narrative of a local who experienced the backlash firsthand. It’s about what it’s like to strongly identify as both a New Yorker and a Punjabi-Indian Hindu in a world without the World Trade Center.

The Venn Diagram of Heems’ life creates a fascinating cross-referencing database that makes him particularly well-equipped to tackle these issues earnestly and to do so in a Rap album. In “Suicide by Cop” he name drops F.N. Souza, calls himself the Hindu Grand Puba, and says he’s the “brown man equivalent of the video for “Woo Hah” before hinting at the existence of a US drone surveillance program. He is a brown man, a New York Rap fan, a Wesleyan grad, and an economist all at the same time, and these layers overlap to create a bracing ideological prism. The writing is intricate and thoughtful but not dense, and though there is plenty to unpack it isn’t a lecture. You aren’t forced to learn anything. He doesn’t have the answers and he isn’t seeking them, either. The story never resolves. He embarks on a journey of self-discovery — unapologetic and unafraid — mind-mapping with the fear surrounding 9/11 as his emotional start point.

Eat Pray Thug is a remarkably moving opus condemning ethnocentricity and wallowing in relational grief. It’s about levels of interconnectivity and how flimsy those links are. In a mere matter of minutes, two planes changed how Americans responded to Heems, his family, and those from the Middle East and South Asia. His relationships seem to deteriorate just as quickly. “Home” laments a complicated romantic relationship that is doomed to fail. Two songs earlier, on “Flag Shopping,” he documents the treacherous ordeal of proving one’s patriotism in a climate that basically resembled a modern equivalent of the McCarthy hearings. “We’re going American flag shopping / Red, white, and blue on our crib / The neighbors threw rocks at the house / They’re making it harder to live,” he raps, and you can feel the anxiety as his voice strains.

The album is woven together by the moments that isolate the individual aspects of his being. This is highlighted  by the rumbling, Harry Fraud-produced “So NY”, in which he barks, “I’m so New York I still don’t bump Tupac” before crowning himself the Hindu Spike Lee and admitting he was forced out of his home by drones and President Obama. He puts on a technical display on “Jawn Cage.” The idiophonic “Hubba Hubba” and the robotic “Al Q8a” both have a Das Racist-like energy and sharp wit; on the former, he references Amadou Diallo, Abner Louima, and raps in spanish in a three bar stretch. Many of the themes are heavy, but they never drag, and they don’t feel heavy until the very end when you’re left with a muddled mess of feelings and no immediate reprieve.

Heems waits until the final moments to pack his biggest punch. On closer “Patriot Act,” a flute-driven soliloquy that’s more spoken word than Rap verse, he recounts the events following the collapse of the Twin Towers blow-by-blow. “And the towers fell in front of my eyes, and I remember the principal said that they wouldn’t / And for a month they used my high school as a triage, and so we went to school in Brooklyn / And the city’s Board of Ed hired shrinks for the students and maybe I should’ve seen one/ …And from then on they called us all Osama,” he says solemnly. It is a gripping, gut-wrenching tale that ends with the father of a former classmate getting deported a decade after the attacks, undoubtedly a residual effect of fear of a radical Islam. The heartbreaking story is a microcosm of Eat Pray Thug: Speaking for the disenfranchised like Rap rarely does.