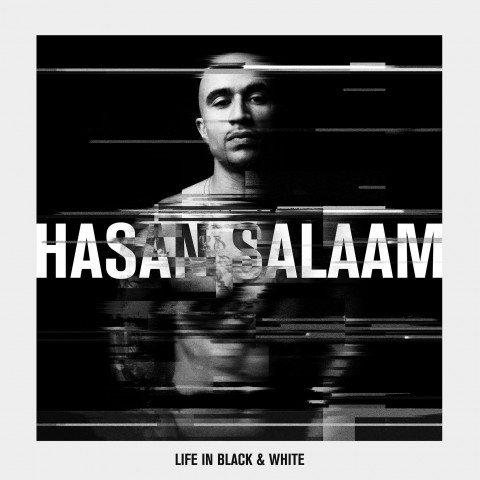 At a midpoint between flashy and more left field conscious emcees, Hip Hop always finds a way to balance itself out. Much in the way pop sensation MC Hammer and politically driven Chuck D once coexisted, Drake and Lupe Fiasco are able to occupy the same space today. Sharing traits with both of the aforementioned, Hasan Salaam is a biracial Muslim with staunch underground leanings, impassioned about telling his personal truths to the world. Though he has ascended the rungs of independent success over the past decade, 2011’s Music Is My Weapon not only made a difference for his burgeoning career but the lives of others, with all profits going to fund educational and health initiatives in West Africa. As a voice of the times, his latest release Life In Black And White represents two of the most vivid and illustrative sides of America’s increasingly hostile social tension.

Reflecting back to a time where higher-minded acts including X-Clan, Poor Righteous Teachers and Brand Nubian reached the masses, Hasan Salaam uses his story to inspire mental revolution. Setting the stage for the album’s theme of cultural exploration, “Definition” provokes thought in its literal breakdowns of the respective positive and negative stigmas behind white (“the color of pure snow”) and black (“absence of light”). Linking up with his confrontational angry A-alike Immortal Technique on “Jericho,” Hasan spares nothing with his timely attack against domestic injustice. Placing himself on the front lines, he invokes the names of fallen victims stating “They call for blood, they’re calling the squadron/But I am Oscar Grant, I am Trayvon Martin.”  Also going so far as to dismiss the commercialized (and arguably ineffective) leadership of Al Sharpton here, he waxes poetic with “Racism been stayed right on track, and none of it changed just because the president’s black.”

Using interludes from Spike Lee’s “Jungle Fever,” Hasan Salaam musters up the courage to share his innermost turmoil, drawing a parallel to the famed director’s knack for portraying human depth. “Father’s Day” is a solemnly bitter tale of neglect that switches to introspective empathy upon discovering his dad has fallen ill, Salaam’s issues compounding on “Pain Killer” where he explains why alcohol is his coping mechanism of choice. In a similar vein, “The Way (Kilo)” speaks to people in less developed phases of self-realization struggling to make it through life’s rat race. Where his sense of civic responsibility is commendable, he mostly falls short due to the lack of flexibility in his gruff vocal inflections. This flaw is most glaring on “Mile High Club” which barely comes off as a friendly dedication to the fairer gender, and the drum free “Like Silence” where the contrast of acoustic guitar clashes with his harsh delivery.

Stepping up to the plate in hopes of benefitting others, Hasan Salaam’s musical gift lies in well-intentioned messages shaped by transparent honesty and genuine human concern. Evidence of this is found in songs like “Modern Warfare,” where he’s determined to confront and expose evils while figuring out solutions; true to Hip Hop’s former strides towards systemic overhaul. Hailing from the former Rap hotbed of New Jersey, his community minded efforts have made a global impact. However,  his important ideas are an acquired taste likely to reach the hearts of a relative few. Often guilty of preaching to the choir, Life In Black And White lacks the accessibility that would push Hasan’s name further. Instead, he remains relevant to those patiently open to accepting the brash toughness that runs concurrent with the gems he drops.