The Black Opera - The Great Year 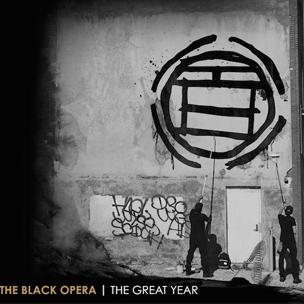 One branch on the Mello Music Group’s underrated and expansive tree has been The Black Opera, a covert duo choosing to keep their identities shrouded in mystery while having underground roots. With ties to Michigan’s Athletic Mic League (and their most widely recognized member Mayer Hawthorne), The Black Opera’s union has become a full time hustle that has earned the crew a growing followership thanks to their steady stream of EPs and albums since 2011. Using Rap as a chosen device to make highly conceptual art, The Great Year serves as their latest offering.

Mixing battle charged lyrics (“Behold The Opera”) with conscious overtones and futuristic visions of apocalypse, The Black Opera fully covers their bases in the way of social commentary. One particular issue they find themselves preoccupied with is the economic disparity between flossy emcees and the general public. They succeed in fleshing out this theme on “Rich Like You,” a look into the thought patterns and processes of those persuaded by glitz and glamour-based music. Parodying the Hip Hop’s bastardized version of prosperity gospel, widely accepted “on my grind” raps are addressed with the following:

“I heard your single, you was rappin’ bout that shiny stuff / You said that I could get it too, if I grind enough.”

Further detailing cultural shifts, “Used to bump that Wu-Tang, now we bumping 2 Chainz” brings the idea of gaudy imagery misleading spectators full circle. Along a similar vein, “No Water” imagines a world where one of nature’s most precious resources is a signifier of wealth, except the duo falters a bit here. Subversively illustrating the plight of third world countries, this slightly shoddy analogy takes away from California producer Jansport J’s unique chanting tribal rhythms.

The underlying theme of The Great Year continues the ethos of what The Black Opera has stood for since its infancy: a struggle to maintain one’s soul by thinking outside of the box and designing blueprints without compromise. “Feedback” cleverly tackles this, as the group finds themselves subject to the opinions of label executives, peers and a shortsighted audience, all asking them to dumb down or switch up their pace in one way or another. Fully set on breaking new ground, “Talking Revolution” is more than mere rhetoric. Railing against the daily dependency on social media and taking Michigan Republican governor Rick Snyder to task for injustice, their edgy act is gospel to the relative few within their reach. Mostly relatable, The Black Opera has achieved the rare gift of going completely left field without isolating their demographic.

The bulk of The Great Year is done by the relatively unknown Arjun Singh, a visionary who is largely responsible for The Black Opera’s mix of satire and hope in the face of tragedy. The group’s main focus is on catering to the niche base sharing their staunch values. Though their convictions are respectable, the main issue is the lack of empathy shown with their hard stances often failing to account for humanity’s dichotomy. Most glaringly, “God Speed” draws a correlation between wearing Air Jordan sneakers and drug dealing, one of a few flawed fallacies that stood to benefit from more careful examination. Forward thinking, progressive and often ahead of their time, the album boosts the profiles of their otherwise reserved members, but ultimately their best course of action would be one mindful of the grey matter found between the black and white which they harp on.