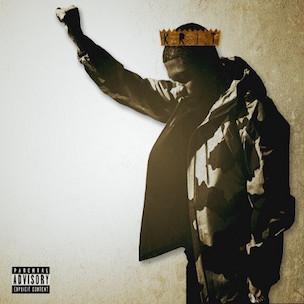 Big K.R.I.T. has a hard-earned grassroots following, but he struggles to move up Southern Rap’s totem pole as others offering comparably less substance shoot to the top. Catapulted by the acclaim of K.R.I.T. Wuz Here, his Def Jam debut Live From The Underground represented the eclectic consciousness of OutKast and the brash chauvinism of Pimp C, a conflated effort that, ultimately, no one quite knew what to do with. He’s been playing around with his sound since, but K.R.I.T. has yet to cash in on his early potential as singles like “What U Mean” left his introspective sensitivity buried deep while the Ludacris assisted ode to mixed signals didn’t quite stick. See Me On Top Vol. 4 attempts to catalyze anticipation for his second scheduled retail album Cadillactica while proving Kendrick was right to see him as a rival.

See Me On Top Vol. 4 finds K.R.I.T. detouring from the “free album” formula of previous mixtapes such as Return of 4Eva and returning to the traditional mixtape fare of his pre-Def Jam See Me On Top series. A clear highlight is “Mt. Olympus,” where he addresses the quasi-controversy of Kendrick Lamar labeling him competition on the now infamous “Control” verse. K.R.I.T’s response to the Hip Hop world’s thirst for conflict is a level headed one, as he takes aim at both listeners and the fickle nature of the game, saying, “Thought they wanted trap, thought they wanted bass / Thought they wanted molly, thought they wanted drank…” Lashing out in his own defense, his verbal mayhem directly calls out anyone who underestimated his talent prior to a dominating peer ranking him within the elite. It’s this controlled rage that reminds just how potent the Mississippian can be when speaking from his heart, but things fall apart when the proceedings become formulaic.

The major distractions from Big K.R.I.T.’s greater vision are rehashed territory. K.R.I.T. is more than a lyrical and stylistic match alongside heavyweights on the remix to Rick Ross’ “Supreme,” and his freestyle over Drake & Lil Wayne’s “Believe Me” invokes his call to the wilds of man/woman relationships. As does his Rico Love assisted “Pay Attention,” which serves as an anthem appreciative of an exotic dancer’s beauty, indicative of how K.R.I.T.’s music has grown slightly more sensitive over the last few projects.

The tape ends with “Never Going Back,” an honest rationalization of the concessions his music makes in pursuit of profit, while the complementary “What’s Next” shows a connection to everyday human plights expressed by relatively few modern mainstream emcees. See Me On Top Vol. 4 finds K.R.I.T. both showing why he’s so rabidly beloved as well as why he hasn’t quite hit the mainstream jackpot. It’s a true mixtape in the sense that none of the beats are original. It doesn’t serve as an entrance for new K.R.I.T. fans nor does it give you an idea as to the direction of the new project. It seems to cater directly to his loyal fan-base, which has aesthetic value—just not as much as K.R.I.T.’s album-worthy mixtapes have provided.