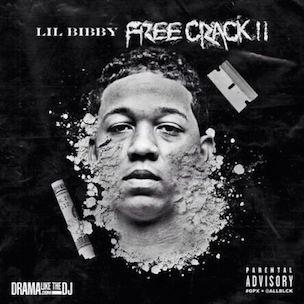 The Chicago Rap scene has exploded onto the cultural stage with a diverse assortment of unique aesthetics coloring a sonic palette that now dictates the shifting tides of the genre’s national picture. Gifted kids, as they have so often before, are acting as the creative force plotting Rap’s trajectory, and the Windy City is the primary breeding ground for emerging talent right now. One such young upstart is Lil Bibby, a 20-year-old who isn’t so much a phenom as he is a workhorse, rapping consistently in a burly timbre that bulldozes through beats in a way that’s almost comical, if not trivializing. His debut mixtape, Free Crack, which was instrumental in the manufacturing of his buzz, was grizzly street Rap personified, and it won fans over with a technical approach to hood storytelling. While he does stay true to that formula, Free Crack 2 is Bibby’s first foray into sounds with a more crossover appeal, and it lulls due to an inability to transition into that headspace.

Earlier this year, Lil Bibby landed on XXL magazine’s annual “Freshman Class” list alongside three of the more high profile personalities from his city: Lil Durk, Vic Mensa, and Chance the Rapper. His presence represents a different, previously underrepresented segment of the Chicago landscape that isn’t recognized by the selection of the other three performers. Lil Bibby made his mark carving out his own space between the shout happy street mantras of traditional Chicago drill and the city’s eccentric, alternative scene, and he has stayed true to his brand if for no other reason than he has no other choice: He is a somewhat underwhelming personality, and there’s a chance he could still get lost in the shuffle if not careful.

With that in mind, moments of Free Crack 2 are disconcerting. The core of Lil Bibby’s viability lies in his ability to remain consistent, an unwavering constant amid an avalanche of unpredictable personas, but for brief, unexplainable spurts he seems to forget that, venturing off into uncharted terrain. He follows a Bibby staple like “Dead Or In Prison” with Juicy J’s druggy sonic noir in “Montana,” which name-drops Joe, Tony, and Hannah. Then, he strangely throws a Wiz Khalifa verse on “For The Low 2.” He’s thinking expansion, but he’s unable to execute. The mixtape has its share of bangers, and it roughly follows the mold of the original, but Bibby makes several head-scratching aesthetic decisions in what feels like a failed attempt to break out.

Every now and then, Free Crack 2 drifts into bizarre, unfamiliar territory. Instead of doing what he knows best, steadily and consistently, he veers into a weird, untested generic type of status Rap. On “Boy” he enlists T.I. for a spacey stunt anthem courtesy of P-Lo of the HBK Gang production team. He lines the hazy synths of “Can I Get” with an amateurish singsong, and he follows suit for the Hip-Pop-esque, Sak Pase-produced “I Be On It.” It isn’t that the songs are bad, per se; Bibby just never seems comfortable on them, and it’s awkward to listen to.

When in his pocket, however, Bibby is as menacing as ever, and Free Crack 2 provides its fair share of dark and intricate street Rap. The Chicagoan seems most at home rapping side-by-side with emcees of his ilk, namely Lil Herb and Kevin Gates. The DJ L-produced “Game Over” finds him trading bars with the former, and “We Are Strong” features an uncommonly dexterous verse from the latter. The opener, “Can I Have Your Attention,” is a poignant bit of self-awareness: in a crowded region, Lil Bibby will be vying for our ears. “Can I have your attention? Fuck that, when you hear me talk you better listen,” he spits. Attention is earned. The question remains, does he have the presence to command it? The jury is still out.