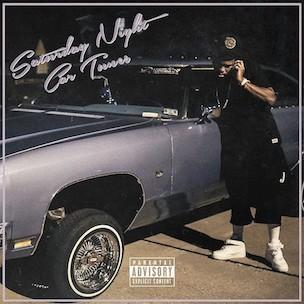 Few artists release content as frequently as Curren$y, and can top Spitta’s track record of consistently providing quality music. While the New Orleans native doles out material more  frequently than seasons change, his batting average remains high despite the large volume. While fans await the release of Pilot Talk 3, or even How Fly the album, Curren$y dropped Saturday Night Car Tunes seemingly as a holdover until one the above comes out. So while Spitta’s wit and wordplay are ever present throughout the project, the cohesion and focus of previous projects are absent this go round.

The chemistry established between Curren$y and King Thelonious on The Drive In Theatre is still intact, as the combination of emcee and producer on “House Shoes” turns out to be one of the standouts of the six song project, even if Spitta doesn’t finish the song. Curren$y opens the track rhyming, “The boy so clean, he sweat Febreeze / Killa whip, turn strips to murder scenes / Niggas is sick, kick game, quarantine / Coke flow, ink pen Medellin.” However, the stop and restart in the third verse makes it clear the song is unfinished.

“Just Might Be” with its, “This just might be Pilot Talk 3” hook makes it clear that Saturday Night Car Tunes is more of a holdover until the release of Pilot Talk 3 than truly being a stand-alone project, which to most Spitta fans may be just fine. However, to outsiders, the project doesn’t provide much. “Dojo,” features Curren$y’s How Fly partner in rhyme Wiz Khalifa, and it finds both artists paying homage to a relationship that spans both their early careers and the grind that got them to where they are currently. The studio Curren$y and Wiz spent most of their time during the period Curren$y recorded his Pilot Talk projects was Ski Beatz’s “Dojo.” While the laid back vibe provided by Ricky P and Sledgren may be perfect for a Jet Life smoke session, the song lacks the impact that once brought new fans to the duo on the cult favorite How Fly.

In the end, Saturday Night Car Tunes provides material from Spitta his core fans can most enjoy: smooth instrumentals, witty word flips, metaphors, and a celebration of the grind and the spoils of staying down. Unfortunately, it’s done without the cohesion, depth, or highlights of other Curren$y mixtapes such as Covert Coup or albums like Pilot Talk. Those who aren’t die hard fans may be better off checking the aforementioned projects or awaiting the release of Pilot Talk 3 as opposed to boarding this plane.