Souls Of Mischief & Adrian Younge - There Is Only Now 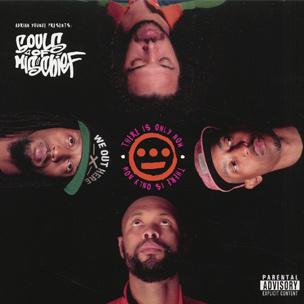 “The past is an illusion, there is only now.” This line from A-Plus is the prevailing wisdom for listeners of Souls of Mischief and Adrian Younge’s There Is Only Now. Unlike a traditional Hip Hop concept album—think Disposable Arts by Masta Ace—the narrative on There Is Only Now is a mostly uninterrupted stream of consciousness. Save for the occasional interlude, breaks in the story only occur when one plot ends and another begins.

To call There Is Only Now unique would be inadequate. The storyline is extremely complex, with recurring motifs (the black truck) and characters (Womack, Stoney and Miriam). If filmmaker David Lynch made a Hip Hop album, it would probably sound like this one. It’s hard to follow, but that’s the point. Younge and Souls of Mischief want your undivided attention for the album’s entirety.

After the intro, the listener is thrust right into the action. In true artistic fashion, interconnecting storylines are articulated through interconnecting verses. But even when they aren’t, each member of the group comes correct lyrically. On “All You Got Is Your Word,” Tajai spits, “Wimpy flows never keep me on my tippy toes / More feminine than every woman I’ve been with before / Rappers be shallow, hollow / Frontin’ from the real deep / My words are the only thing I can give and still keep.” His flow here is reminiscent of the Souls’ classic track “93 ‘til Infinity”, but best of all, he expresses the essence of the There Is Only Now experience. This particular bar is specific to a moment in the album’s story, but can also be interpreted as nothing more than a dope rhyme sequence, especially to listeners unaware that they are experiencing an elaborate concept album.

Production is handled by composer Adrian Younge. Excellent track sequencing and the often shorter song lengths make for a very fluid listen. The Souls are also accompanied by A Tribe Called Quest’s Ali Shaheed Muhammad, who plays the K-Now radio host, filling listeners in on the developing plotlines during the interludes. Younge’s production switches between Boom-Bap and grittier styles, which is both refreshing, and reminiscent of Golden Era trends. His style falls somewhere between Dan the Automator and Madlib. Occasionally, he gets elaborate with his layering, so some beats are more multifaceted than others. But overall, the production is solid and consistent throughout.

Philosophically, the message on There Is Only Now is an intelligent one, as is the case with most things Hiero. Part of the experience is hearing the story as it unfolds, but at the same time, the Souls of Mischief are dealing with concepts like the Theory of Relativity, and experiencing life while being fully present. Like the album itself, the cast of guest appearances is minimal, yet praiseworthy for its originality. Busta Rhymes and Scarub (Living Legends) portray Womack and Stoney, two characters in the story, while Snoop Dogg supplies some wisdom of his own on the title-track. The seamless listen from beginning to end, and the intricacy of the story itself make it almost possible to listen to There Is Only Now just once.