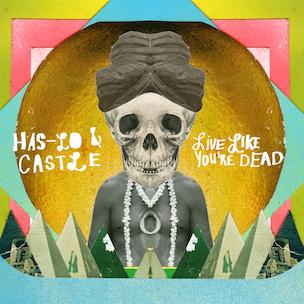 About three-fourths of the way through their latest partnering, Live Like You’re Dead, Has-Lo and Castle trade turns reflecting on their respective shortcomings with the track, “Stubborn Vice.” It’s the kind of brooding, insular offering peppered by Curb Your Enthusiasm-styled endearing dickishness that made enlisting Has-Lo to rework Castle’s Gasface album earlier this spring a no-brainer. When Has-Lo raps, “I admit that I can be a dick / I need to take a pill, I’m aggravated very quick / Like a broke sinus / Used to eye a situation on a bias, I only got more just like it,” over a Castle’s deftly-chopped Soul loop, you get the feeling these two could do this in their sleep. The fact they chose to essentially reverse course for the majority of the album is a curious but ultimately rewarding one.

Live Like You’re Dead is built upon experimentation. Weaved within familiar underground tropes of Golden Era interpolation (swiping Erick Sermon’s opener from EPMD’s “So Watcha Sayin’” for the chorus of “Go To Work”) and crate digging (a quick flip of Roy Ayers’ “Red, Black & Green” for “Yoga Pants”), is an album very much in the moment. Has-Lo and Castle are just as likely to target Instagram thirst traps as they are to draw inspiration from Malcolm X or Killer Mike. Where previous individual efforts such as In Case I Don’t Make It or Gasface played out like superior works restricted to the “headphone masterpiece” subgenre, Live Like You’re Dead plays it fast and loose. Sometimes the experimentation backfires, as the parody “Hennessy-Yak Rap” drones on too long to serve its intended purpose, clocking in at a longer time than one of the album’s standout tracks, “Aggasi & Ashe.” But the end result is a sort of recasting of Has-Lo and Castle. Later tracks such as “The Uncomfortable Truth About Stardom” and “My Uncle” prove these two can still do the tortured genius thing really well, but the most rewarding aspect of the album is the voyeuristic view it provides of two guys talking shit, having fun and crafting a really good Rap album somewhere in that milieu.

There’s a thin line between clever, everyman Rap and the whiny diatribes of suburban struggle emcees. Much like their labelmates Quelle Chris and Open Mike Eagle, Has-Lo and Castle can easily downshift between the existential moment of questioning the decision to drop out of college and pursue a career in Hip Hop but still laugh at the voluptuous dropout passing them in a Range Rover. They’re not above covering binge drinking, the aesthetic value of a perfect ass and other subjects found in the mainstream Rap populating the Top 40 chart. They just find cleverer ways to do it. Having refashioned themselves from solitary people watchers to a pair of seniors who stroll in late, make fun of the class and still ace the pop quiz, Has-Lo and Castle both provide an interesting album and raise the stakes for the next curious turns in their respective careers.