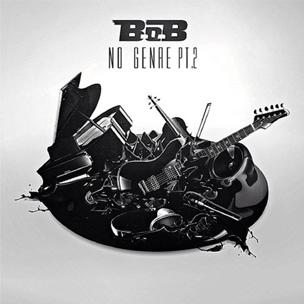 Lil B is far from the only rapper who would have you believe that Hip Hop is like the NBA, and if one were to put that theory into practice, B.o.B. is a severely undersized stretch four. Since his retail debut in 2010, he has proven to be nothing short of versatile, able to go hard in the paint with street tapes like Fuck Em We Ball but also step beyond the arc, such as his successful partnerships with the likes of Weezer and Taylor Swift. Not too many rappers can pull of the Sweatsuit approach, but mixing “country grammar” and malleability, Bobby Ray’s presence is so cemented in various circles that we collectively take his uniqueness for granted. B.o.B. is back with the second installment of his No Genre series.

B.o.B. fastbreaks to an early lead with “Mission Statement,” a high-octane intro ushered in with the poise of a veteran. As he laments genre labeling and burns all metaphorical rulebooks Farenheit 451 style, the rapper provides nothing in the way of subtlety here. It’s easy to forget sometimes that B.o.B. is a solid lyricist when he puts his mind to it, but with a heavy heart and unhinged flow he illuminates his true potential. But lyrics are just a fraction of the equation and on “Many Rivers” stuffs the stat sheet with his beat-making skills. Amid a K.R.I.T.-esque instrumental of Soul samples and speedy drum kicks, B.o.B. ventures off into some real introspective talk. Post the days of failing to get a tip at Subway, Bobby’s concerns are more than just his personal rags-to-riches fable, but also staying close to the fans that ultimately propelled him into mainstream prominence.

“Lambo” begins with a crisp guitar solo and an unspoken promise of excellence, but a potential dream collaboration of two southern all-stars in B.o.B. and Kevin Gates fizzles out almost immediately. However, rookie sensation Jake Lambo purposefully mistakes the title for an ode, proving to be far superior to his much older and starrier guests. But B.o.B. redeems himself with “Lean On Me,” a fiery cut that manages to invoke the same sort of eerie longing of “Memories Back Then” with a touch of the neo-crunk that cemented the year-long radio tenure of “Still In This.” Victoria Monet’s resounding vocals sound almost divine as she alley-oops to the energetic man of the hour for one of the tape’s most impressive showings.

B.o.B.’s revolving subject matter renders the question of, “Is-it-oochie-wally-wally-or-is-it-one-mic?” irrelevant. The blueprint is that there is no blueprint, so against the backdrop of whip-talk and club bangers, a motivational like “Follow Me” does not come across as a depersonalized effort fashioned out of less sincere motives. More Marley than Ray, Bob removes his trademark shades and rallies his listeners to follow him “to the stars, where we belong.”

For an artist who spends much of his time lamenting the overall lack of creativity in regards to Hip-Pop, B.o.B.’s Pop leanings have been historically formulaic at best. Despite their success on Billboard, humdrum efforts like “Airplanes” and “Both of Us” are hardly the work of a genius being discriminated against. On No Genre Pt.2, B.o.B. makes clear dashes to Pop excellence while maintaining a nice balance. After the forgettable “Get Right,” B.o.B. provides a step in the right direction with “Drunk AF.” Featuring Ty Dolla $ign. The song works well as a breezy, spirited summer anthem of “Y.O.L.O.” sensibilities. His player’s ball leanings are realized on “Forget.” She’kspere laces the cut with southern chopped vocals and spacey synth noises that mesh well with B.o.B.’s syrupy push in Kirko Bangz territory. But for what B.o.B. displays here in his Pop aspirations, his lyrical I.Q. takes a steep decline as is often the case in his career. Lines like, “Imma fire the pussy up/ You can cool it down with ice” are a far cry from the solid performance of “Mission Statement.”

On “Swing My Way,” B.o.B. reworks KP & Envyi’s late ‘90s hit, coating it in the same sort of eclectic, space age pimpin’ swag of vintage 8Ball & MJG. Even an assist from Lupe could not kick-push “Nothin’ On You” into anything enjoyable or relevant to the male species, but heatrocks like “Swing My Way” have the crossover potential to temporarily usurp the current big three (Breezy-Trey-Drizzy) of baby-making playlist providers. Once again, B.o.B. proves that he can make universally relevant jams without succumbing to hackneyed approaches. “Chosen” closes out the tape on a high note like the climatic fist-pump of victory. B.o.B. and T.I. have refined their collaborative chemistry tenfold since the clumsy days of “Bet I Bust,” and “Chosen” is arguably their best collaboration to date.

Throughout his career, B.o.B. is somewhat guilty of lecturing us about his encompassing talents or rebel-without-a-cause sentiments rather than just letting his merits shine on wax. Everyone knows there is no boxing Bobby in, so there is no need to belabor the point. With three erratic studio albums to his credit, B.o.B. has never put together anything resembling a classic, even in the hyperbolic dialect of the Hip Hop consumer. Even in light of its lesser moments, No Genre Pt. 2 is a clear upgrade over what has been an inconsistent catalogue thus far. His lobbying efforts have proved successful, but now it’s time to see just how far his reach really is. Otherwise, he will fall right into the same sort of genre as Allen Iverson and Jadakiss; extremely talented yet ringless individuals with a sneaker commercial to their credit.