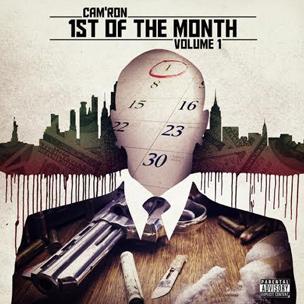 Cam’ron is still facetious enough to move dope in front of a church. Even now, there is a sort of tongue-in-cheek sharpness to the way he utilizes his mythology, one perpetuated both by past LPs and real life ordeals. When he raps, “Shots, I can take a few / Matter fact, I ate a few,” it immediately recalls his 2005 run-in with D.C. shooters where an alleged attempted carjacking of his Lamborghini left him hospitalized; the Washington Post made sure to mention the car was royal blue. There is an air of flamboyance to everything Killa Cam does, even in moments of fallibility and fragility, and he is perhaps more conscious of it than anyone.

This association with all things gaudy, a kinship with finding the ostentatiousness in the minute details in even the most mundane pursuits, is what has made Cam a fixture in Rap for over a decade, and he has evolved into a cultural behemoth. Rather unsurprisingly, the 1st Of The Month EP doesn’t deviate from his norm; in fact, it falls even further into old tropes than one might expect. The intro, “Other Side,” acts as the point of reference (assisted by mid-level Dipset member, Sen City, Cam paints coming from the gutter with a noir veneer), and once the ball gets rolling, it’s just Cam doing what he does best: embellishing.

Cam’ron seems to be in a constant battle to one-up himself, and it can be quite entertaining, especially when the stakes are low and the space is compact. The raps are mostly generic but he sneaks in colorful tidbits of information like the expiring statute of limitations on his crimes (there is no statute of limitations on criminal sale of a controlled substance or murder in New York City, but that fact only builds Cam’s legend), and he picks his spots lining various narratives with his signature flair in an effort to make certain elements pop and add to his lore.

When Cam’ron is most aware, it’s almost like intentional self-parody. 1st Of The Month excels in the instances where it falls in love with its mythos. He’s either telling wildly graphic lies or insane facts with flashes of hyperbole, and it’s fascinating that it’s hard to tell the difference. On “Talk About It,” he compares his life to a movie right after casually divulging he has a 200-foot yacht in an aside. Cam interacts with the mother and significant other of a former comrade turned snitch at his funeral in “Funeral,” implying the whole time that he deserved it, as he remains camouflage among the mourners masquerading as one of them.

“He gotta leave Earth, yo / We ain’t doing burials / 10 shots to the face, man / Oooh kill ‘em, TerRio,” he raps and its hard not to chuckle despite the vile nature of the anecdote. That’s the catch: Killa Cam never takes himself too seriously, and his drug kingpin raps can be mistaken for farce when many of the punchlines devolve into jokes.

The 1st Of The Month EP feels like Cam’ron working his way back into album shape; however, and it is a marked achievement to take two features from perennial placeholders on the Dipset undercard and turn them into salvageable records. The Un Kasa-led “Put It In The Sky” is the most anthemic song on the EP with a chanting refrain that is rousing. It is a prime example of Cam at his showy best, blurring the lines between fact and fiction, confessions and quips. Every single agency is apparently after him: ATF, CIA, FBI, DEA. He’s America’s Most Wanted in his head. Cam’ron’s presence seemingly inspires the maligned Kasa to stick out his chest and tell his tallest tales, too: “You’ll get hit with the gun they killed Kennedy with,” he spouts. Maybe it’s a Dipset thing.