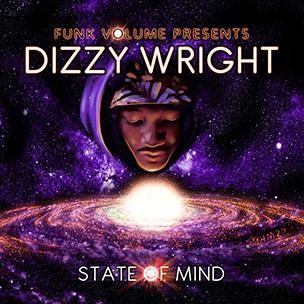 No rapper has ever escaped the clutches of Sin City; it is a sand trap for Rap perhaps because of its larger-than-life ostentatiousness—which may be too grandiose of a backdrop—even for Rap) or maybe even its notorious Rap history (Vegas’ most iconic Rap moment is also one of the genre’s most melancholy: Tupac Shakur’s murder). In spite of that, Dizzy Wright has managed to carve out a lane for himself in the Internet age, and his exceptional Golden Age mixtape set the stage for what seemed to be a remarkable second act. With the State of Mind EP, however, Dizzy’s momentum grinds to a screeching halt, marred by lackluster narration and empty, noncommittal production that finds him grasping at straws. State of Mind is a monumental step in the wrong direction mostly because it doesn’t aspire to meet the same lofty standard set by his previous region-transcending work. It is relatively flat.

Dizzy Wright’s State of Mind EP, a seven-track offering clocking in at just under 30-minutes, feels uninspired and amateurish almost from the jump. Whereas Golden Age was carefully arranged and highly polished, with Dizzy pulling out all the stops to impress—enlisting the likes of Joey Bada$$, Logic, Kid Ink, and even Wyclef Jean for good measure—his first offering of the year feels forced and often under mixed.

“Success is a state of mind, and in due time you gon’ hear my best work,” Dizzy raps in the opening seconds, but it’s hard to receive the message when his adlibs punch in harder and louder than his verse, distractingly so. “Everywhere I Go” and “Reunite for the Night” are completely forgettable. “New Generation” aspires to be a raucous club anthem, but it lacks the savior-faire; it has the energy of a prospective pledge trying to impress his brothers at a frat party. There is nothing here to suggest the best is yet to come, and in his position Dizzy can’t afford to lose the attention of the public, even for a second.

Perhaps more than anything, Dizzy Wright’s State of Mind EP suffers from a dramatic lack of identity. Despite flashes of the unique ability and personality that powered his previous projects, too many moments here are generic and off-brand. On every hook he drones in a monotone patching together countless traditional Rap platitudes that would be right at home on any Wiz Khalifa mixtape. The production is mostly sparse and chimey to the point of being almost completely disinteresting (See: “Calm Down” for reference). It lays bare under his mild-mannered timbre without affect. When Dizzy raps, he raps in bursts of syllables before punching hard on the final word of a line or stanza, and it is impactful when effective. However, in clusters it can bore, and a startling shortage of interesting subject matter forces him to rap his way out of corners with little success; he doesn’t possess the lyrical acumen or the inflection necessary to rap simply for Rap’s sake. There is very little that captivates and invites repeated listening.

Everything feels very bogged down by inconsistency and the sum of State of Mind’s parts is rather mundane. “Reunite for the Night” explores semi-conscious themes, but it bores due to a lack of depth; Dizzy doesn’t explore any one idea with any real measure of profundity or lucidity. This is a common motif. On “Nuttin Bout Me,” Dizzy reiterates that we don’t know anything about him, and therein lies the problem: the State of Mind EP doesn’t elaborate on much of anything, and it certainly doesn’t provide us with context about the Vegas rapper. “My city dependent on me,” he raps explicitly but it isn’t implied in the quality of the EP; he never raps like an MC carrying the heavy burden of fostering support for his entire region. One of the few bright spot is the Rockie Fresh-featured “Too Real For This,” which layers what sounds like a fascinating, synthy harp progression with bluesy bass and staccato but active drum programming, and it feels like a blossoming moment of sonic growth among weeds. The duo tag-teams effectively, but it simply isn’t enough to save State of Mind from what is an otherwise flaccid performance.

If Dizzy Wright hopes to claw his way out of the seemingly cursed Nevada Bad Lands, he is going to have to be flawless. He possesses the talent to be a successful maneuverer on the indie Rap circuit; he must simply identify his niche and stick to it. To do that, though, he can’t have lapses like this one. The public’s attention span is just too short for that.