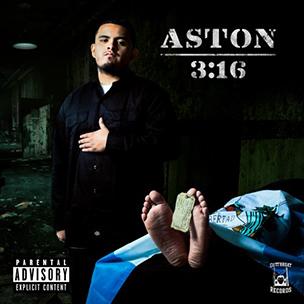 With his Cutthroat Boyz Vince Staples and Joey Fatts, A$ton Matthews has emerged as one of the more relevant voices from the new crop of artists out of the West Coast. A street soldier before his time in the booth, the California native released his first mixtape NOFVCKSGIVEN in 2011 and followed that up with Versace Ragz in 2013, which highlighted his experiences on the front lines and his ability to deliver his poetic take on ruthlessness.

His new mixtape A$ton 3:16 ceremoniously plays off the cover of Ice Cube’s 1991 classic Death Certificate and seeks to build upon this storyline, with Matthews jumping right back into the mix as a drug-dealing, gun-toting gangster who could care less about consequences. “Money, Mackin’, Murda” serves as his manifesto, with Alchemist’s morphing production harkening back to ‘90s Hip Hop classics. Matthews takes no prisoners here, letting loose his lyrical cannon: “If the price is right, the barkers get to barking out / We ain’t with the talking, corners calling bitch, chalk ‘em out,” he raps.

“Mack 11” and “Initiation” are equally savage in execution, as Matthews makes it clear that it’s either play or be played in the streets. “I need it now and I want it all / It just makes it sweeter that you got your bitch involved / And all I ask is for the Lord’s forgiveness / Cock back and give this ho the business, can’t afford a witness,” he spits on the latter track. The tales of violence from A$ton Matthews shouldn’t be all that surprising to listeners who have heard their fair share of killings on any Eminem or Tyler, The Creator album. However, he delivers it in a way that feels unmistakably pure. With scars on his chest from a gunshot wound at the age of 18, it’s hard to question his legitimacy.

There’s no shortage of aggression on A$ton 3:16, nor does Matthews shy away from calling in a few big name guests for a verse or two. The decision turns out to be a double-edged sword for A$ton, is still developing his own voice as a rapper. Impressive verses from the likes of Action Bronson (“TLC”), A$AP Ferg (“Lullaby”), and Ab-Soul (“TTG”) end up hurting Matthews in the end, who has the right demeanor but sometimes lacks the technical skills to hold his own. It also doesn’t help that he switches up his flow throughout the project, which put him out of his comfort zone. Matthews recently told HipHopDX he was using lean during the creation of A$ton 3:16, and one can question if it affected his focus here.

At nearly the same length as NOFVCKSGIVEN and Versace Ragz combined, A$ton 3:16 certainly isn’t lacking in material. However, its biggest flaw comes from Matthews’ inability to move beyond the corner talk and significant body count. There are very few moments of contemplation or true insight, where the listener can connect with Matthews on a deeper level. Instead, he reverts to tracks like “What You Need” and “Like This,” which end up sounding formulaic in delivery. “Exitus” is the rare example of A$ton being reflective, and he knocks it completely out the park. Thoughts of paranoia, deceit, and grief are highlighted, with Matthews questioning his purpose in life. “Lord make a way, I ain’t perfect / Provide the light while I’m searching / Lord take away my mom’s burdens / Before I think about murkin’,” he raps over Joey Fatts’ groovy backdrop. “Exitus” is too little, too late on the mixtape, but Matthews can still use this as a building block for the future.

A$ton 3:16 fails to capture anything more substantial than Matthews’ menacing narrative and shows how limited he can be from a creative standpoint. Even as the paradigm of what exemplifies Rap continues to shift, it’s clear A$ton Matthews will always have an audience because of his gangster appeal. But his biggest test is proving he can expand on his past experiences and share new ideas that resonate within his identity. Matthews is just not there yet.