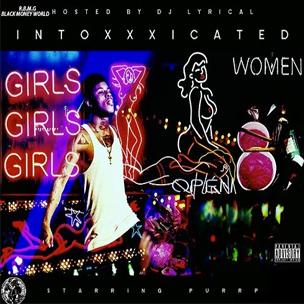 It’s safe to assume that SpaceGhostPurrp will never deviate from his patented formula of cinematic Stygian noir, a sonic algorithm used to unlock what lies beneath Rap’s darkest depths: a murky, foreboding abyss. He is quite insistent on exploring the haunting necropolis to its complete and total discovery, perhaps even obstinately so; he is tireless in his pursuit of lo-fi despotism. If he won’t budge, the question then becomes: How long can he sustain his horror show’s allure? To what lengths will he go to maintain the novelty of his sinister soundscapes, especially when they are betrayed by the simplicity of his narrative? Purrp’s BMW 2: IntoXXXicated provides early warning signs suggesting his reign of terror may be approaching its end, but not before it attempts to drag you down into his chasm of nightmarish synths. It absolutely summons fear…just with mixed results.

If you need proof that SpaceGhostPurrp’s dark, lo-fi brand of shadow Rap remains a wondrously puzzling addition to Hip Hop’s Internet-cultivated indie wave, consider the fact that his debut album was released by Alt Rock powerhouse 4AD, home to synthpop wunderkinds like Grimes and Purity Ring. The label wasn’t really that far off base with the signing: check the gloomy programming on “Grandloves” and “Cartographist” for reference. (It, like the work of SGP, is seemingly permanently suspended in dark nebula.) In the wake of Mysterious Phonk: The Chronicles of SpaceGhostPurrp, his terrific 4AD release—which served as his first and only trial period with fully mixed and mastered records—SGP has drifted back into his comfort zone, avoiding polished sound in favor of raw tracks that sound more like rough drafts. Perhaps he should reconsider, though. What made Mysterious Phonk so tantalizing was hearing Purrp classics like “Black God,” “Get Yah Head Bust,” and “Grind On Me” at their most heightened level of crystal clarity; it was as if a fog had been lifted and you could fully see (and hear) SGP’s genius for the first time. BMW 2 yanks you back into the haze, and it’s hard not to get distracted by the white noise. Not only does it feel redundant considering previous works; it also fails to mystify, a product of oversaturation.

For the most part, every single twist and turn on BMW 2 leads you into familiar territory. It is a sequel in the truest sense: it is a derivative of each and every one of its darkly evocative predecessors. Songs like “S.A.N.D. 2014” and “Ride 4 Me” are sonic effigies encapsulating SGP’s lack of growth or diversity: throw them anywhere on Blvcklvnd Rvdix 66.6 or NASA the mixtape or the first installment of Black Man’s Wealth and you wouldn’t even notice a difference. The monotonous lyrics are equally tired due to their sheer toothlessness. It’s not just that they lack any sort of technical wallop, either; it’s the fact that everything he says is a variant of something he’s said before. When he peddles stuff like, “They know who I be / Bitches lovin’ me / Gotta get the cream / Niggas fuckin’ with my steez,” on “Who I Be” you’re liable to forget which tape you’re listening to. Every lyric and sound is copied from past ideas and pasted into place formulaically in an attempt to induce the same visceral response on repeat. Eventually, it gets stale, though, and BMW 2 feels like the breaking point. SpaceGhostPurrp, a self-plagiarizer, usually manages to entice just enough to avoid suspicion, but he’s at the end of his rope.

Ironically, some of BMW 2: IntoXXXicated’s brightest moments are when it perfectly emulates his best art, conjuring up nostalgia for Raider Klan tunes circa 2011. The sequence of “Make Her Say,” “4 You,” and “OwwL” is simply breathtaking in its manifestation of dystopianism. Every synth, sample, screech, and snarl feels delicately assembled to create perfect replicas of the ghosts of SGP’s past. Each is brilliant in its own right. The best track on the tape, though, is without question the unconsciously rich “StaXXX,” which matches SpaceGhostPurrp’s aesthetic with R&B vocal harmonies and steel drums. It’s one of the few changes of pace and it stuns. Even with its moments of magic, however, BMW 2 is simply too marred by its inability to embrace change as a natural evolution of artistic vision to truly be good.

SpaceGhostPurrp’s BMW 2: IntoXXXicated isn’t the masterful reimagining of his discography he intended it to be, but it is worth mentioning that some of the craftsmanship in the production is right on par with his better work. The problem is, it sounds exactly like said work, so much so that it becomes difficult to differentiate them. To some, such consistency is admirable. BMW 2 is more than just consistent, though, it’s predictable. Consistency is one thing; facsimile is another. However, if SpaceGhostPurrp insists on endlessly perusing Rap’s depths we should let him. Eventually, he’ll just wander off into obscurity. May he dwell in the land of incubuses for all of eternity.