Verbal Kent - Sound of the Weapon 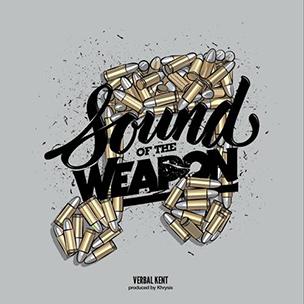 When Chicago’s Verbal Kent emerged as one of two emcees in Organic Mind Unit, then one of 10 in Giraffe Nuts, he spat as if shit-talking during a pick-up game. Now, though, he’s a battle rapper among a shrinking number of contenders. At his best, he gasps in between intricate verses written as those before him (EPMD, A Tribe Called Quest, Wu-Tang Clan) seemed to instruct on wax. At times, he sounded like Eminem without the FCC-surveilled identity crisis. At his worst, he relies on laments for Golden Era Hip Hop as he did in his fifth record, 2011’s Save Yourself, saying, “Bitch, I’ma take your mic like I’m Kanye West / Give me back, give me back real Hip Hop.”

In Sound of the Weapon, his sixth album and first via Mello Music Group, Verbal Kent stops complaining and takes action.

He still raps mostly to challenge other emcees, but now with gritted teeth and the intensity of an Olympic boxer. The sympathetic “No Excuses,” or his version of Nas’ “I Can,” makes for a rare dull moment, although it does explain Verbal Kent’s drive in layman’s terms. He lists Stevie Wonder, Albert Einstein and Rosa Parks as examples of greats who suffer greatly and, to him, enough reason to snap out of self-pity fast.

In real life, such trivia can feel like cold comfort. It’s hard, though, to argue with the results. Brutal, emasculating insults reference culprits of headline-grabbing sex scandals, like Jerry Sandusky and Kevin Clash. Opener “Truth” unfolds with a snapshot of his live shows—frenzied fans, billowing weed smoke—but then underscores his claims with references to a police investigation’s key figures, starting with, “I ain’t counsel, but I represent you / Everything irrelevant but than what the evidence prove.” Weapon is Verbal Kent’s most damning proof that he’s devoted notepads to mapping out lyrical obstacles—sing-song assonance, alliterative sputtering, rhyming patterns that expand and contract like an accordion—as if plotting a black diamond ski course.

Another, related change in strategy bodes well for Verbal Kent. For the past two albums, 2010’s Save Your Friends and 2011’s Save Yourself, the emcee rapped to an grab bag of beats by the J. Dilla-inspired Kelakovski, Ugly Heroes co-conspirator Apollo Brown and 9th Wonder—some fresh, some stale, some undercooked. This time, sole producer Khrysis (Justus League, The Away Team) alternates between twinkling, soulful boom bap (“Raponomics,” “No Excuses”) and glinting, alarming loops that recall the Neptunes nightmarish turn on Clipse’s Hell Hath No Fury and, in turn, Lalo Schifrin’s iconic compositions for Bruce Lee’s Enter the Dragon (“Slap the Shit Out of You,” “Underrated?”). Clearly, he gets that Verbal Kent takes cues from Hip Hop’s past but shouldn’t sound overly nostalgic.

“I’m kind of stupid for it, but I really mean it when I say that my only long-term interest is to be a part of [Hip Hop] history,” Verbal Kent’s official bio reads. Weapon maintains that, even while releasing new music at Rihanna’s pace, he’s taking the terribly long route by releasing non-commercial records of diss tracks that forgo mainstream Rap’s biggest vices (drinking, smoking, fucking). Should he ever delve deeper into storytelling—the title track, a portrait of Chiraq, is a great example—he may be able to cement that place sooner. For now, he’s created a Hip Hop style guide of Sound of Weapon, the sort of work that never makes best-of lists but proves to be an indispensable reference over time.