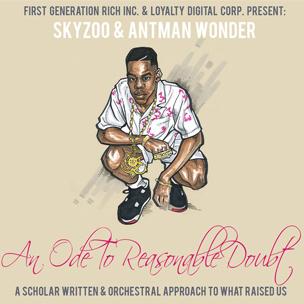 Reasonable Doubt is arguably one of the best Hip-Hop albums of all-time. While Jay Z has recently ranked it as his best album, its overall influence on the game has been recognized and acknowledged. Not only did it help in launching the career of one of the best to ever do it, but it has inspired several emcees who have come after, among those is Skyzoo. “An Ode to Reasonable Doubt” finds Skyzoo paying homage to Shawn Carter’s classic, and the results are sure to impress both fans of Reasonable Doubt, and long-time Skyzoo fans alike.

First, to address the clear elephant in the room: yes, the concept of live instrumentation-based recreation of a New York Hip Hop classic has been done before. While the overall concept behind Elzhi’s “Elmatic” and Skyzoo’s “An Ode to Reasonable Doubt” seem identical, one listen to both projects and the difference in the handling of the concept is clear. Skyzoo has ripped the plot line of Reasonable Doubt away from the drug game—with all its ups and downs—and placed it in the world of an up and coming emcee, thus, reinforcing the “Rap Game/Crack Game” metaphor Jay would break down on his following album. Sky’s ability to keep up the metaphor throughout the project is what makes “AOTRD” special. While we’ve heard the comparison several times, Skyzoo not only breaks it down, but he does it with his story all within the structure of a Hip Hop classic.

While Skyzoo’s “An Ode To Reasonable Doubt” doesn’t revolve around the drug game, it still exists in Brooklyn. Sky is still able to paint the desperation to succeed, the emotions he deals with in the struggle to do so, and the reaction of others in that same struggle. On “Praying Against D’evils,” Skyzoo raps, “Whoever said the speakers was the easy way out, couldn’t understand the mechanics / And these faggot ass industry folk, granted / Nine to five is how you survive, but my moms had two jobs / So for her, nine to five was five to nine / My spirit broke, and my vision altered, ‘cause you know how visions go / It’s either pray to God, or Shawn Cor-ey…” While Jay worshipped legendary gangsters on the original material, Sky references Jay and his success throughout “AOTRD” as the goal.

Reasonable Doubt’s posse cut, “Bring it On” is recreated in the form of “Thinking You Can Hang,” with Sky, Torae, and Sha Stimuli replacing Jay Z, Sauce Money, and Jaz-O. This track alone contains enough quotables for an album. While this recreation compares favorably, something is lost in translation when “Coming of Age” becomes “Conversing on a Come-Up.” The same can be said for the conversion of “Regrets” to “The Truth About Regrets.” Part of the problem with remakes of classics is no matter how well you remake the tracks, you can’t create the nostalgia attached to the originals. While this is felt across the project, it’s especially with the track which could be viewed as launching “The Dynasty” and the epic closeout to Jay’s debut.

With “An Ode to Reasonable Doubt,” Skyzoo does an amazing job of paying homage to a classic record that launched the career of one of the greatest to ever do it, all while telling his story of climbing up within the Rap game. His ability to parallel ascensions makes “AOTRD” more than just live instrumentation remakes of someone else’s songs, it tells Skyzoo’s story, all while bringing the grand tales of Reasonable Doubt down to a level a lot closer to that of most of it’s listeners. While the subject matter may not hold everyone’s interest the same, the feat of creating “An Ode to Reasonable Doubt” has to be respected.