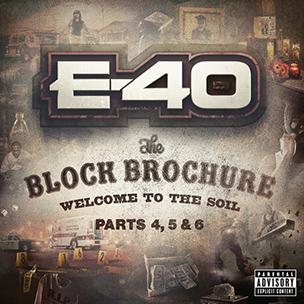 Unquestionably one of the most prolific, quotable and influential artists to ever come out of the West Coast, E-40 is now officially 20 solo albums deep in the Hip Hop game with his latest outing in The Block Brochure: Welcome To the Soil Parts 4, 5, & 6. And while he’s arguably running neck and neck with Snoop Dogg as the West’s most longevity-laden artist, unlike Snoop, 40 Water hasn’t had to resort to gimmicks, reality television and mainstream media leanings to have a successful catalog that’s over two decades long. Instead, the Vallejo, California emcee has managed to stick to a solid blueprint of palpitating, Bay Area-styled production and his own unmatched vocabulary of slang.

One of the main talents that has set E-40 apart from many of his contemporaries for so long is his distinct ability to find a solid balance between the larger-than-life West Coast persona he’s conveyed on records since the late ‘80s and the everyday people realism that comes naturally to him. On Welcome To The Soil Part 4, that talent is most pronounced on “Got That Line,” which finds 40 combining his greatest asset in his breakneck speed delivery with a pulsating, mob music slice of production, spitting lines like, “Survival tactics, never hustlin’ backwards / Throw off methods why I wear these glasses / So I can look like a nerd, po-po roll right past us, savage ass nigga from the gravel…”  “Bendin Corners” contains some of his most intricate and witty slang on the entire project: “I go ape on a fake if that’s what he want, I’m not a chump / I’m from Vallejo, Cali-Harm-ya, I ain’t no punk / D-boy apparel, candy Camero / Sharp like a arrow, hood like Valero…”

“Bamboo” features a chunky stomp-and-clap backdrop that allows for 40 to get as wordy and raunchy as he pleases, managing to easily squeeze what seems like hundreds of extra syllables into just a few bars. “By Any Means” with Webbie and J. Stalin is one of the bleaker songs on the set in terms of subject matter, but it is strangely overlayed with a somewhat celebratory, danceable beat, containing brief robotic sound effects. It’s proof that E-40 has one of the most inventive and unorthodox ears for production in Hip Hop history. The Chris Brown and T.I.-assisted “Episode” is reminiscent of Rick Ross’s “Diced Pineapples” in its raunchy forwardness, but actually a more entertaining song altogether. And though the Roger & Zapp-inspired “Money On My Mind” comes off as somewhat bland compared to some of the more inventive, risk-taking moments on Part 4, it still succeeds as an attempt at throwback nostalgia.

It’s clear from the majority of Part 4 that E-40 hasn’t lost a step in his 20-plus years of creating and releasing music. Throughout much of this project’s first installment, listeners will hear tons of thick, syrupy sound effects paired with pounding drums—all elements that have been part of 40’s signature sound for the last two decades and have heavily influenced generations of artists from all parts of the map.

Welcome To The Soil Part 5 grows a little slower and more somber, but is curiously careful not to compromise any of Part 4’s energy and humor, especially on tracks like “Mister T,” “A Breath of Fresh Air” and “Do What I Gotta Do.” Each track displays that it’s not always fun, games and ballin’ for E-40: the funky, weighty and soulful “A Breath of Fresh Air” takes a break from the turn up by getting slightly more solemn with long time partner B-Legit. “Do What I Gotta Do” gives a grim glimpse into recession-stilted Hip Hop. “Mister T,” though celebratory and swaggering, also features more subdued, murky production as the perfect compliment to E-40’s gloating and showboating rhymes. And “Project Building” featuring Gucci Mane is sure to become billed as a true goons’ anthem for 2014, rife with choppy, darkly staccato sound effects and plenty of BMF-indulgent imagery.

Two of the best moments from Part 5 have to be “All My Niggaz” featuring Danny Brown and Schoolboy Q and “Plush.” While “All My Niggaz” is simultaneously bass-heavy and wispy, “Plush” is another deep-thumping offering; the stellar features from Danny and ScHoolboy Q on the former and the rippling bounce of the production on the latter make for music that’s dripping with enlivened and overtly materialistic ratchetness. Even “Countdown” with 2 Chainz—with its slight Bollywood undertone—makes for an entertaining club joint. E-40 and 2 Chainz together lend to a lowest common denominator feel for this joint, but one that is still sure to get heads to nodding.

Once the listener gets to Welcome To The Soil Part 6, The Block Brochure begins to lose steam and enthusiasm. “Champagne” featuring Rick Ross and French Montana is surprisingly one of the few tracks throughout the entire 45-song set that feels forced and seems made specifically for the purpose of mainstream radio recognition. “Penetrate” tries to come off as a bold, seductive sexual advance, but instead misses the mark entirely and falls flat and forgettable. And although “Turn Up Or Burn Up” brings the upbeat feel of Part 4 back for a moment, it’s unfortunately not quite as imaginative or as fun as songs earlier in this musically massive project.

However, Part 6 isn’t without its charm. Tracks that aren’t quite standout but keep the third installment from falling completely off include “Tonight” featuring Jeezy and Cousin FIK, “Rep Yo District,” and “Up All Night.” “Put It In The Air” is thick with classic West Coast, Death Row-era production on the beat. With E-40’s signature Bay Area flow and respectable guest spots by Mac Mall and San Quinn, it’s one of Part 6’s most brilliant moments. And “Don’t Shoot The Messenger” wraps up The Block Brochure on a self-examining, world-weary note as E-40 takes a page out of the book of Scarface and gets cautionary and lamenting about his upbringing, the state of both Hip Hop and society at large.

All in all, E-40 has built an entire career out of Hip Hop that’s relatable, yet adventurous, playful and entertainingly repetitious. The Block Brochure: Welcome To The Soil Parts 4, 5, & 6 continues in that tradition. While it’s a lot to ask of today’s stunted attention spans and isn’t without lapses, The Block Brochure proves that E-40 is still more ahead of the curve at crafting imaginative Hip Hop music than many new artists can ever hope to be.