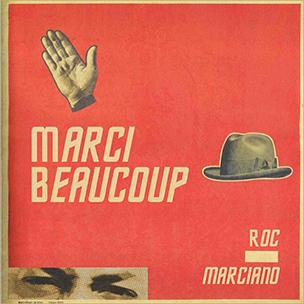 On 2012’s Reloaded, Roc Marciano was part-hustler, part-crime boss, a new-age street poet made in Kool G Rap’s image. He was Michael Corleone and Gustavo Fring—a coolheaded ambassador with sharp business acumen and an understated mean streak. On Reloaded, Marciano didn’t knock you out, but he won with subtle lyrical jabs and quiet confidence. Marciano flexed more muscle on his recent mixtape, “The Pimpire Strikes Back,” even if he shared the spotlight with Action Bronson, Evidence and others.

Marciano’s new album, Marci Beaucoup, picks up where “Pimpire” left off as a collection of raw rhymes that reference the drug game and street survival. Marciano raps alongside the aforementioned emcees while bringing Blu, Quelle Chris (“Cut the Check”), Guilty Simpson (“Squeeze”) and others into the mix. There’s no clear theme and it ends abruptly, which makes Beaucoup feel more like a mixtape than an actual album. It recalls Ghostface Killah’s Ironman or Raekwon’s Only Built 4 Cuban Linx as a project focused more on group triumph than the lead rapper. As a result, Marci Beaucoup is a relay race: Marciano spits a verse and hands the baton to Simpson. He hands off to Bronson and so on.

The production is a bit shaky, though. While the beats are good, the looping soul samples grow tedious after a while. There’s also a disconnection between Marciano’s flow and the mixing. He’s monotone, so it’s a strain to decipher his wordplay beneath the background fodder and noisy vocal clips. But there are gems if you can catch them: He’s “blowin’ Cubans with druids” on “Willie Manchester” and getting “slow top” in the Beemer on “Squeeze.” On “Dollar Bitch,” Marciano and Maffew Ragazino mimic the Wu’s infatuation with Italian mob culture. With Marciano, you’re not enamored with what he says, but how he says it. He brims with gritty bravado, and is one of Rap’s most technically sound emcees, even if he’s largely unheralded in mainstream circles.

In the end, Marci Beaucoup is a nice victory lap that falls just short of Reloaded. There are standouts here—“Drug Lords,” “Psych Ward” and “Soul Music” to name a few—but the overall product isn’t as spectacular. Like its predecessor, Marci Beaucoup follows a standard formula of dope beats and dope rhymes, which works fine for an emcee of Marciano’s caliber. With Beaucoup, Marciano and his friends just wanna rap and talk shit. That’s fine. Marciano is a benevolent leader.