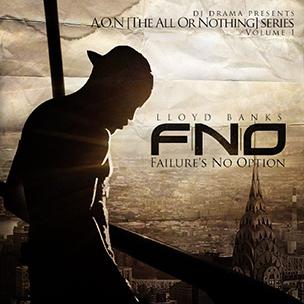 As Rap’s more mainstream iteration heads into a strange period defined by globalism, an expanded notion of what makes for great production and a bevy of unproven upstarts laying claim to the throne, veterans like ex-G-Unit luminary Lloyd Banks rule the industry’s underground ranks with an iron fist. As long as emcees practice the art of storytelling, know how to spit an air-tight 16 bars and can remain commercially sustainable by any means necessary, they occupy the important space of being the protectors of Rap at a time where its classic standard is arguably in its greatest need for aid. In naming his latest mixtape project “FNO (Failure’s No Option),” it leaves absolutely no question as to Banks’ intentions as an “old school” king in a new school age.

Eight producers contribute 16 tracks of material to the project. For those expecting some sort of 808 and Trap-Rap laden rehash of his performance on stellar 2003 G-Unit debut Beg For Mercy, you’re listening to the wrong mixtape. The bulk of the work here is handled by Doe Pesci, a Queens-based producer who has been working with Banks since 2010’s Hunger For More 2. However, the overall cleanest and production given the best lyrical treatment is Beat Butcha’s staccato drum and double bass loop for Banks and Harlem emcee Vado’s “Paint the Sky.” At the point where dominant New York emcees stopped being drug dealers with an ear to the streets and became 21st century corporate cash kings, rappers like Banks and Vado became also rans insofar as their mainstream relevancy. There’s something to their ability to stay grounded—as opposed to daring to touch the ground for fear of causing an earthquake—that makes their performances particularly ear-worming. Yes, Vado’s descriptions in particular of “[wanting to be a] King like Coretta’s marriage,” and daring haters to come at his crew because “we put a hole-in-one, we like golf, too” don’t exactly tread new lyrical territory for Rap music, but are delivered with a level of efficiency and charisma that make them nevertheless worthwhile.

Banks is clearly more than able to handle himself as a performer. Putting out a mixtape at this point is the equivalent of making public the results of one’s yearly physical examination. The free download is the audio equivalent of saying, “I’m alive. I’m well, my rhymes are still tight, and yes, I am available for bookings.” Picking any one of the 16 tracks on the mixtape—say, “Keep Up,” track 11’s ode to having so many hoes but so little time—Banks effortlessly utilizes a rare (to his defined skill set) double-time flow over a melancholy half-time beat, and executes with perfection.

With artists like Lloyd Banks making mixtapes and the Rap music community waiting for Trinidad James’ debut album to finally drop via Def Jam, one of the Rap industry’s greatest flaws at its most culturally dominant moment is exposed. Rap has become a culture driven more by promise than results and by assumed expectations than clearly-defined abilities. In making a corollary to the National Basketball Association, the issue with that theory is made readily apparent. Every year we get excited about a team like the Los Angeles Clippers with their trend-driven, fast-break happy highlight reel flair. However, at the end of the year, it’s always the San Antonio Spurs—an older, fundamentally sound and defensively solid team that wins. If you are still a fan of artists like Lloyd Banks, you believe like Banks that “failure’s no option,” and hope for a return to an era before Rap arguably lost its way. Thus, in erring more on the side of substance over style, this mixtape is a welcome anathema from what is arguably, for the classic Rap fanatic, a terrifying era.