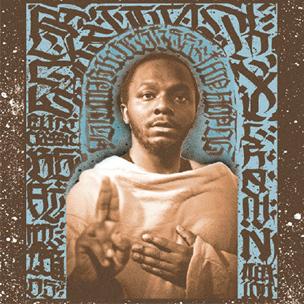 People didn’t understand Ol’ Dirty Bastard when his first album dropped. I still remember my cousin’s comments on it: “This dude’s crazy. He’s singin’ and talkin’ ‘bout period blood and AIDS and what not.” Yeah, ODB lived on his own planet, and 1995’s Return To The 36 Chambers: The Dirty Version was completely unhinged. But it was creative freedom at its best, even if you cringed at the crudity. He was just a guy doing what he wanted on his own terms.

Rapper/producer Denmark Vessey embodies that same spirit. In an infomercial to promote his debut album, Cult Classic, he gets evangelical. “Are you ready to change your life?” a male voice asks, as Denmark sits Indian-style with candles aflame. “Are you ready to accept Denmark Vessey into your heart?” Then there’s his funny video for the album’s title track: Denmark, dressed as a cult leader, rides public transportation. Folks ignore him for the most part, except the one lady who slides away from him on the bench. Maybe she’s a non-believer.

Cult Classic follows the imagined tale of an aspiring rapper, whose career in Hip Hop doesn’t go so well, so he enters religion to acquire fame, power and wealth. At the beginning of the story, the rapper wants to buy a house and a yacht. Midway through, the emcee becomes cult leader Dr. Yessev and implores you to join his flock. Cult Classic examines how religion strips the ability to think individually. It mocks the hypocrisy of religious leaders like Creflo Dollar, who wanted to shoot church members for not paying tithes, and criticizes cult leaders Jim Jones and Marshall Applewhite, who organized mass suicides of their respective followers. In 1978, Jones convinced 909 people to drink cyanide-laced Flavor Aid; in 1997, Applewhite convinced his Heaven’s Gate followers to take barbiturates and alcohol in a so-called “final exit.”

Denmark condemns such groupthink with witty one-liners that exhibit his weird sense of humor and propensity for not giving a fuck. He crucifies false prophets with satirical nails of contempt. Like on “Thank You Based God,” for instance: After Vessey sings of the spoils of organized religion, we actually hear Creflo discuss his sadistic plan to kill non-paying congregation members. On “HoeininDaGaddaDaVida,” (pronounced “Hoein’ in the Garden of Eden”), Denmark turns the story of Adam and Eve into a philandering street narrative: “Adam had Lilith, she ain’t wanna suck the dick / Adam said fuck the shit, I’mma get another chick.”

The music is just as intriguing as the back-story. Produced entirely by Chicago beatsmith Scud One, the soundtrack collects foggy soul loops and random vocal samples akin to something you’d hear in a Blaxploitation flick. These selections are random, giving the LP a nostalgic feel that supplements the album’s theological premise. Denmark doesn’t pile on the rhymes, though; he falls back in certain spots and allows the instrumentals to breathe without obstruction. On “Just Talking,” the protagonist is unsure of his path; by the album’s end, he’s cocky and a bit jaded: “You be dreamin’ ‘bout yo’ sixth straight mixtape, fuck yo’ mixtape.” With Cult Classic, Denmark tells the story with entertaining fervor. It’s an enjoyable listen that succeeds because of its raw indulgence and callous honesty. Sure, the references are crass and the LP stumbles to the finish, but there’s something infectious about it. Just like ODB, Denmark does what he wants on wax. Have you accepted Yessev into your heart?