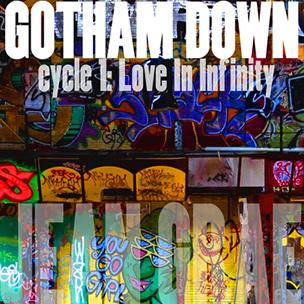 Originating from the underground business model preceding the modern Digital Age, Jean Grae has actively shifted paradigms, dispelled limitations and broadened the perception of women’s participation in Hip Hop. In a time where the fairer sex uses carnal appeal as the foremost means of garnering attention, her honed poetic ability and quirky sense of humor have her widely considered one of this era’s most crafty lyricists irrespective of gender. As a veteran who has weathered the storms of label ties including Babygrande and Talib Kweli’s defunct Blacksmith imprint, she has returned from an unexplained five-year hiatus (2011’s Cookies Or Comas mixtape notwithstanding) as an entrepreneur empowered to fully control all aspects of her brand. Gotham Down: Cycle 1: Love In Infinity (Lo-Fi) is the first of a planned trilogy of EPs setting out to usher in this new independent phase of Jean Grae’s career.

Jean Grae’s latest output places a fresh spin on her formula largely comprised of lovelorn mementos and expressive self-reflection. Gotham Down is yet another display of her artistic genius at work, a further maturation from her earliest days as a grimy, undiscovered battler. An embittered note to a number of exes attempting to work through the confusion of parting ways for good, “iwanteweback” begins with Jean relaying a contradictory message: “Sometimes I want you back just to adore you / But mostly I just want to destroy you.” The song’s light piano and contrasting bass line blend to bring about a beauty that outshines the raw emotion conveyed within this piece. No stranger to painful introspection, “Before The Summer Broke” is one of her most somber songs to date. Seeking empathy from listeners in regards to the torturous creative process, she says “Coincidence, you want the bars, I want my freedom,” going on to  explain, “I dealt with blows beyond the belt / Shit that if I told you, you’d be drinking like myself.” Stripping her often comedic side down here allows for a shared catharsis, serving to benefit anyone finding themselves able to relate.

Putting her conceptual mind to great use, Jean Grae uses Gotham Down to continue the running tale of an assassin whose background is shrouded in mystique. This character appeared during the viral sensation that was last year’s video for “Kill Screen” (where a dysfunctional relationship ends in murder), the EP’s only song where she abandons narratives to flex her more aggressive flow punctuated by drum kicks and organs. The title references the obscure video game documentary The King Of Kong, speaking to Jean’s eccentricity along with “Double Katanas,” where she once again interweaves romance gone wrong into her imagined plot. The story’s entertainment value goes appreciated, as bearing witness to the caverns of one’s soul could come off discomforting were it a less inspired artist.

In a field dominated by testosterone driven sexism and rampant misogyny, Jean Grae’s presence makes profound statements in favor of ingenuity and womanhood. Determined to maintain a knack for penning rhymes that is rivaled by few, “FUCKERY LEVEL 3000” (the first release from the forthcoming Gotham Down: Cycle 2: Leviathan) pushes the envelope leaving an appetizing air of mystery as to the next piece of her puzzle. For now Love In Infinity (Lo-Fi) stands on solid ground as a satisfying addition to Jean Grae’s captivating trajectory.