Black Milk - No Poison No Paradise 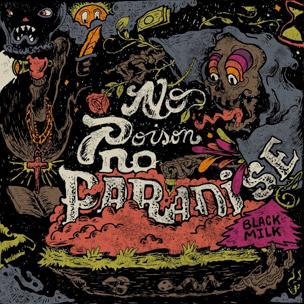 In years’ past, Black Milk didn’t mind bragging about himself. As he saw it, he made the best beats and had an all-around better life than you. At least that’s been the narrative for the Detroit producer/emcee. Though Milk’s previous solo recording, 2010’s Album Of The Year, touched on his tumultuous 2009, it was a mostly festive parade of heavy drums and celebratory rhymes that touted his affinity for lavish surroundings and fun-filled weekends. Black Milk has done well with that approach, but he’s often rapped just for rapping’s sake.

For his new album, No Poison No Paradise, Milk details his upbringing through semi-fictional character, “Sonny,” who endures the same hardships as any kid growing up in an urban setting. He’s a good-natured child who straddles the line between right and wrong. He faces daunting peer pressures that force him down a different path, away from the rigid Christian values instilled by his parents. At its core, No Poison No Paradise outlines the growing pains of adolescence and the daily struggles of adulthood. It examines the frustrations of limited means, and how those limitations dictate your survival. “Sonny” wants to play it straight, but what do you do when things don’t happen fast enough? With No Poison No Paradise, we get a sense of Black Milk’s personal life. We discover that he’s always been destined for great things, even if he faced certain obstacles along the way.

On “Perfected On Puritan Ave.,” for instance, Milk unfolds a vivid tale of innocence and bereavement. We see young Curtis Cross playing basketball in the street. We hear his neighborhood friend, “Man,” yelling encouragement from the side. “Y’all better win!” he implores. We feel the pain of Man’s passing and the distressing notion that the block is changed forever. Milk takes us to “Deion’s House” with perhaps his closest friend, who doesn’t mind taking the heat for “Sonny” when trouble arises. You see, his friend never had much guidance and he wants “Sonny” to make it: “You the only talent out our crew, the only one with potential to get on.” Elsewhere, Milk starts to enjoy the spoils of success, buying a Range Rover and blowing cash with his friends. “Dismal” is told from the perspective of a man who’s lost it all — the fame, the money and the women. It’s a dark tale of despair that I’m sure most celebrities endure when the 15 minutes have ended.

On a practical level, No Poison… is Black Milk’s most technically sound recording. In a recent interview for MTV Hive, Milk said he took some time off to become a better engineer. He was already a great producer, and he wanted to learn more about the specifics of sound before releasing another solo album. That might be the most noticeable aspect of No Poison No Paradise. From “Interpret Sabotage” to “Money Bags,” these instrumentals are crisp and mixed to perfection. The bass levels are just right and the drums smack with the same ferocity you’d expect from a Black Milk album.

Except with No Poison…, these aren’t beats per sé; instead, these feel like carefully crafted compositions that unfold under a cinematic veil of electronic vapor. Milk stays in full control by scaling back the rhymes. He isn’t so eager to rap; rather, he withdraws occasionally to let the music breathe. These visual arrangements set a scene for the words to follow. Take “Codes and Cab Fare,” featuring Black Thought, as an example: atop foggy synths and ventilated drums, Milk describes life from an outsider’s perspective: “You was on a star chase, I was in a dark place, looking for that glare / Looking for that light ahead, days got dimmer, staring down that dark tunnel hopin’ that you see a glimmer.” “Perfected on Puritan Ave.” was already expansive before a spastic Jazz breakdown pushes it into another stratosphere. Alt-jazz pianist Robert Glasper and singer Dwele make notable appearances on the instrumental “Sonny Jr.,” an improvised dream sequence preceding the album’s spiritual centerpiece, “Sunday’s Best/Monday’s Worst.”

As a result, No Poison No Paradise is Black Milk’s best album, and one of the year’s best in Hip Hop so far. While Album Of The Year was impressive, there’s an overwhelming maturity that carries this record to greatness, a nostalgic flexibility inspired by his younger days in Detroit. Coming-of-age stories aren’t unique, yet Black Milk does the trick with semi-imagined anecdotes from varied perspectives. In doing so, he gives a bigger picture of himself and his cohorts. With No Poison No Paradise, Milk has grown tremendously as a composer and lyricist. Now that’s something worth bragging about.