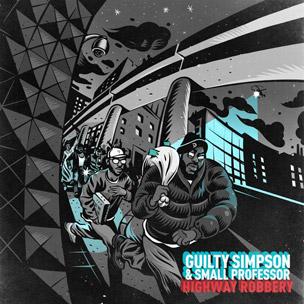 Guilty Simpson has been stomping out abrasive verses since an initial appearance on J Dilla and Madlib’s 2003 collaboration Jaylib. The same aggression that powered lines like, “I sit on the end at the movies and let my feet stick out / Any nigga with a problem get his teeth chipped out,” has been evident on the subsequent releases he’s put out since dropping Ode To The Ghetto in 2008. Similarly, Philadelphia product, Small Professor, has been carving out an equally creative (though arguably less orally destructive) lane via instrumental projects and reworkings such as 2007’s Crooklyn Gangster. The pair find common ground on Highway Robbery—a grimy, dangerous and unapologetic 10-track album that plays out like crime drama from an old pulp magazine.

Simpson effectively conveys the adrenaline-rushing, blood-pumping feel of an actual robbery taking place with songs like, “It’s Nuthin’,” featuring A.G. from Showbiz & A.G., where he states, “Without assistance / We close the distance, and in that instant / I do my job…” Brevity is the key here, as most of the tracks come in at under two-and-a half minutes, and none of them break the five-minute mark.

However, in that time frame, Simpson manages to “turn the party into a hundred-yard dash,” as he so delicately puts it on the song “Get That Pay.” His threats sound scarily believable, and the former Dilla collaborator sounds like a man completely aware of the repercussions of his actions—either that or he doesn’t care. Sonically, the project is built on what sounds like a mix of live instrumentation, hard drums, some samples and ultimately a little bit of Rock ‘N’ Roll and Funk. The resulting sound places the project within a past time and gives it that blue-collar feel that the “Motor City” has become so synonymous with.

Highway Robbery is heavily invested in a conflict between music and street talk. Simpson’s voice breaks into the listener’s conscious on the first track, proclaiming, “I’m what rugged is, fuck a music biz.” Then again on, “I’m The City,” he threatens to punch a certain rapper until his hand breaks.

Given that many new artists have adopted a dense, tricky structure to their verses—whether it be Kendrick Lamar’s fast paced alliteration or Chance the Rapper and Dizzy Wright’s spoken-word style—Guilty Simpson showcases the advantages of the slow-flow. Deceptively simple, the listener would be doing a disservice to their experience if they underestimated Simpson, as evidenced by the following on “I’m The City:”

“My city is a gunshow / So what should I do, besides strap up too / In the window with a birds-eye view / Like a falcon / Nah, more like Malcolm / With the same outcome / Fate is something we can’t outrun / So I’m holding my ground, ‘till your soldiers get down / But they better come correct, because I’m holding some rounds…”

It is more than clear that this project is not meant to be an offering to the radio. In many cases, the target coming under fire from the collective are members of the popular Top 40 audience. Simpson is an emcee who actually has worked with Dilla, a producer who has reached mythical heights within Hip Hop. Small Professor adds his own twist to clunky basslines and a lo-fi aesthetic mixed with various melodies much like Pete Rock, Dilla and Large Professor before him. Together, the two meet on this highway as outcasts within their own genre; once hometown heroes now turned local criminals. Simpson’s lyrics, voice and persona fuse with Professor’s instrumentals perfectly, resulting in a natural product that is not afraid to be what it is.