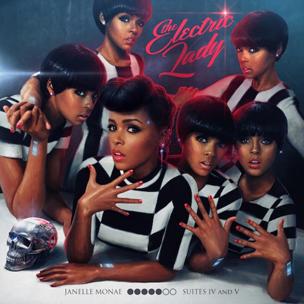 It’s been a decade since Janelle Monae independently released her debut music project, The Audition, on her own Wondaland Arts Society label. The Kansas City native left home to study drama and the arts in New York City and Philadelphia before landing in Atlanta, where she met Big Boi and distributed several hundred physical copies of the aforementioned album. The self-proclaimed “country girl” had set a goal: to inspire.

Often clad in black and white apparel, with red lipstick and a uniquely-fashionable hair style, Janelle Monae’s been performing on seemingly every awards show, while remaining the face of CoverGirl advertisements and commercials. Many of these strides she’s taken in the arts and entertainment business have come to fruition following her 2010 Grammy nomination for Best Contemporary R&B album, with The Arch Android.

The Electric Lady is Monae’s first release since, as the album represents the fourth and fifth installments of her projected seven-part series. Beginning with several collaborations, the set opens with Monae sharing a chorus with Psych-soul pioneer Prince, who also contributes some guitar riffs accompanied by a section of horns. Like Prince who was similarly experimental with his appearance and music, Monae embraces herself (and her musical alter-ego Cindi Mayweather) as a one-of-a-kind individual living amongst people who are attempting to imitate one another:

“I am sharper than a switchblade / First and last of what God made, and that’s the truth / But man, keep on tryin’ to hold me back / While another chicken head come home to roost…”

On the album’s first single, “Q.U.E.E.N.,” which features Erykah Badu, Monae poses an assortment of questions throughout her verses that recognize her independence and strength as a woman. She uses a bridge between a hook and Badu’s verse to say, “Even if it makes others uncomfortable, I will love who I am.” Monae concludes the song, rapping a verse filled with conscious lyrics, referring to herself as a leader “like a young Harriet Tubman” and promoting positive action saying, “While you’re selling dope, we’re gonna keep selling hope.”

The album takes a turn with some effective romantic attempts. “Primetime” is a love ballad with Miguel set to a slower tempo with simple but clever song-writing, while “We Were Rock N’ Roll” is a funky Pop song employing picks at a guitar to lay a background to Monae’s vocals over more upbeat production.

Monae’s affinity for time travel, as previously reported by NPR, is evident on “Dance Apocalyptic” and “Look Into My Eyes.” The music video for the former shows a female-laden take on Andre 3000’s “Hey Ya,” as Monae’s energetic performance draws roars from the studio audience. On “Look Into My Eyes,” Monae’s soft vocals are backed by a string section that together impressively resemble Henry Mancini’s 1961 song “Moon River.”

The album’s interludes create seamless transitions, as the second half of The Electric Lady begins and represents Monae’s Suite V: The Overture. “It’s Code” is another romantic song, this time discussing communication and relationships. On the Electro-funk vibes of “Ghetto Woman,” Monae recognizes the perception of the ghetto and challenges the thought that a woman from such neighborhoods can’t be successful. She closes the song with a fast-paced rap dedicated to her mother, whom Monae explains “had dreams of being on TV.”

The Electric Lady is a continuing example of Monae’s range as a music artist—from slow R&B ballads, up-beat electro-funk anthems, to fast-paced Pop/Dance songs, while also showcasing her ability to write and perform a meaningful Rap verse or two. Monae transcends what we’ve come to see and hear from current Pop stars. There’s no glorifying of childish trends or negative influences, instead Monae favors creating music that could be embraced by varying demographics and is molded to withstand the test of time. This latest release represents the multiple personalities and ideas that comprise the entertaining artist we’ve come to know as Janelle Monae.