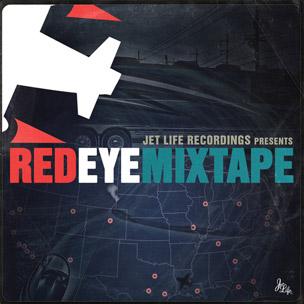 Despite his predilection for piff, Curren$y continues to defy the expectations that come with being a weed rapper. He avoids cliche with original imagery, has increased his following regardless of stylistic immobility, and remains the hardest working stoner in the game after dropping his eleventh project since 2012 with Red Eye Mixtape, released through a partnership with BitTorrent. It’s a tape that shows exactly why Spitta exceeds those expectations, and frustratingly, shows the consequences of other rappers staying on par with them. Red Eye Mixtape is the latest label-wide offering of the summer, and like everything else before it, the label’s boss can only buoy it so much. While Curren$y’s albums are marked by consistent weed jams, the rest of Jet Life is surprisingly inconsistent.

Red Eye begins with “California Mornings,” a hazy intro with a shimmering backdrop handled by Fiend. Just one verse of the West Coast narrative is enough to catch a contact high, and it’s apparent from the get-go that Fiend has what it takes to keep up. The next track, “Grizzly,” marks Curren$y’s first appearance, which comes as a fresh cloud of smoke after Young Roddy’s cliche-ridden intro and hook.

“But I told you, like I tell all of ‘em / Less huggin’, mo’ hustlin’ / Build a money mountain, put a bed on top and we gon fuck in it,” he boasts. Unfortunately, those two offerings are spliced between forgettable, if not corny, attempts from Roddy, Corner Boy P and Deelow Diamond. Deelow’s garish, repetitive bumble through the swag rap, “She Got It Too” is particularly distracting.

But while most of Curren$y’s signings weigh him down on the tape, Fiend shines as the lone promising prospect. The Southern-fried “Crawfish” has Fiend sounding like a refined Big Syke, musing over his morality while “motivated by slave diamonds and Maybachs.” On the blooping, bleeping “Role Model,” Fiend holds his own with respectable multi-syllabics and wordplay. Curren$y arrives for the second verse to deliver a noteworthy song: “Prayin’ at the same time / That none of these devil-eyed monsters of jealousy get the best of me / And killas feel compelled to wish death to me / Shells and yellow tape around the luxury car, of slain stars / Vision of those keep me on my toes, bro…”

Of course, every Curren$y project relies on suitably mellow production, and the other star sleeper of Red Eye is Sledgren, the in-house producer for Wiz Khalifa’s Taylor Gang that delivers on “Right Now” and “I Can’t Stop.” The mixtape makes some mistakes behind the boards—namely the 808-heavy “Man Bando,” and “On My Job,” which sounds like a throwaway Rick Ross beat—but ultimately does its best to cater to each rapper.

Those downloading a posse mixtape sponsored on BitTorrent likely don’t have lofty expectations for it, and nobody turns to Curren$y and Co. in search of deep lyricism. Still, Red Eye’s strongest moments make it worth it for true fans. The songs that Curren$y actually appears on have enough replay value away from the bong, but for the most part, Spitta’s friends ruin the high.