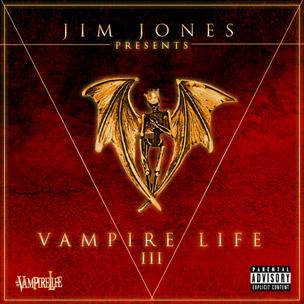 Like it or not, Cocaine/Hustler Rap has become one of the most popular segments in Hip Hop during the last decade. And one of the primary faces of the subgenre in the new millennium has been Harlem’s Jim Jones. Even with all of the “Love & Hip Hop” drama and previous rifts with fellow Dipset affiliates Cam’ron and Juelz Santana, Jones has kept his brand alive through the Vampire Life mixtape series and continues to do so with Vampire Life III.

Much like wildly successful mixtape series’ from the past like Gangsta Grillz, Dedication and Dreamchasers, Jones has found in the Vampire Life saga a lane that he can exploit to the fullest and is keenly aware that his core fan base will support him when no one else cares to listen. By staying fixated squarely in his lane of braggadocious, Harlem Trap Rap—focusing his energies on blowing money fast, ducking police, loyalty amongst his homies, endless groupie love and the one-eye-up life of a hustler—Jones is smart enough to know that he can’t and shouldn’t stray from the sound that got him to the position he’s in now.

The production on Vampire Life III is what melds it together as a whole project, interchanging between the sparse and the scant of 21st century Trap Music production to the more cinematic and layered tunes found in New York Hip Hop. Though not very inventive or risk-taking, it’s at least supremely tailored for the environment that Jones is trying to convey and the stories he tells. It’s rugged and dark without sounding stuck in a time warp of the “We Fly High” era. It’s menacing and threatening but still cocky and boastful enough to warrant listeners having fun with it. You can hear it all over “Go DJ”—a simplistic drum pattern with a stripped-down, a plinking melody, coupled with a repeatable, call-and-response hook. It’s a formula that’s worked to perfection for Jones in the past and will more than likely allow for him to keep releasing music in mixtape form for at least a few more years.

In the realm of lyrics and subject matter, the first couplets on “Go DJ” pretty much sum up all of Vampire Life III:

“They drinkin’ rose but they ain’t pourin’ liquor out / Let’s not forget what all my real niggas about / Make money, drink rose, piss it out / Fuck hoes, kick ‘em out, Lord knows you missin’ out…” By now, Jones has become a seasoned vet and a grand master at the dope boy flow, giving the fans exactly what they want from what his skill level will allow. Jones’ comfort zone includes accounts of run-ins with the law, clapping back at rival hustlers, cooking coke, surviving the streets and avoiding the bing for another day. Frankly, the topics of Jones’ rhymes become extremely monotonous, but only if you go into listening to Vampire Life III truly expecting more from Jones than he’s already given us on previous outings.

But there are a few tracks that set themselves apart from the horde. “Young ‘N’ Thuggin” is an aggressive, pounding therapy session where Jones and his guests Trav and Philthy Rich let loose on their absentee father issues and the dire consequences. And, for at least a moment, Jones is actually outshined on his own track by these hungry upstarts. Just two songs later, “Boyz N Da Hood” intersperses a staggering staccato drum sample with an engaging and bleakly rough backdrop. And Jim Jones fuels a certain sense of hopelessness and lost loyalty by sampling Ice Cube’s voice from the hood classic of the same name while urgently raising his voice and spitting one of the best lines on the entire mixtape, “My memories is like a cemetery / Havin’ distant memories of men I buried…”

And “Summer,” Vampire Life III’s shortest track, sees Jones flipping the word lyrically to talk about how unforgettable summer in New York can be, but also how the street life can eventually catch even the best hustler off guard. Again, nothing we haven’t heard before, but an interesting moment in an otherwise pedestrian offering from Jimmy.

As an artist, Jones’ strengths have always been his personality, his I-don’t-give-a-fuck mentality and an ability to revel in the best and most audacious of the Rap game/crack game lifestyle. Capo does all of this while conveying that message as straightforwardly and as basically as possibly on a record. These factors have always helped to trump Jones’ sometimes-limited skills as a lyricist and repetitive subject choices. That’s what made him viable and popular on previous albums like On My Way To Church, Hustler’s P.O.M.E. and with the first two Vampire Life mixtapes. He does this to the fullest throughout this offering.

At the end of it all, Vampire Life III is a rehash of what we already know about Jim Jones, albeit one that has its moments where it can get your head nodding. It’s pretty much in line with what’s to be expected from Harlem’s Capo. If Jim Jones has done nothing else with the latest in the Vampire Life series, he’s kept his name alive in his particular Trap Rap niche to the demographic that continues to support his music and has given his fans more to feast on and ride out to as they wait on his next major release.