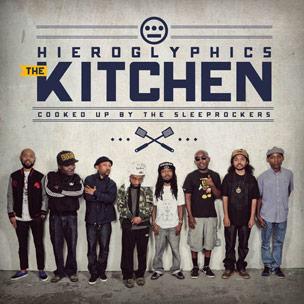 In some ways it’s hard to believe that The Hieroglyphics have only just released their third record. The oddball, Oakland-hailing crew is an amalgam of well-enough-known individuals and groups that it’s just as likely a fan would hit up a Hiero show to get a glimpse at Del The Funky Homosapien or Souls Of Mischief on their own as they would for the collective material. In an endearing way though, the group seems to offer a portrait of functional sustainability in Hip Hop. On the cusp of the twentieth anniversary of Souls Of Mischief’s debut, 93 ‘til Infinity, the larger group continues to act as a vehicle for all of its members to keep making—and touring—music in 2013.

Interestingly, The Kitchen also finds the already deep Hiero group enlisting Sacramento, CA based DJ crew the Sleeprockers to navigate the album’s being put together. The result is a project that is obviously handled by DJ’s/turntablists and overall ends up carrying a fitting vibe. Unlike the almost quota-based cuts that many emcees and producers feature on a song’s hook, the Sleeprockers themselves have nursed Hiero productions and tracks into a full-out, DJ-sequenced album.

The record’s first real song is the second track, “Livin It Up.” The song is built mostly out of a thumping bass and simple horn riff, the ensuing handclap is the last main piece of the beat and just like the introduction, the song also features a heavy DJ presence on the hook. The fourth track, “Golden,” finds the album and the group settling in a bit more; the result is a nicely looped up electric rhythm guitar on the upbeat and crisp as ever snares. “Golden” also opens with authentic beat juggling on the Sleeprockers part and not the more common pre-song airing out of a sample via drum pad mashing. The song’s hook, like the rest of the track, isn’t particularly ambitious but it is delivered to great effect: “Just like the tombs in Egypt / Soon as you see it / You’ll be speechless / Golden / No jive when we slide through / We gon’ provide you / With something to ride to / Golden.” Like other tracks on the album, “Golden” ends with an interlude leading into the next track. This time, the “It’s Always Sunny In Philadelphia” jacked snippet ends with the perfect setup for Hiero’s politically weighty ensuing song: “Charlie, my boy, you’ve got the gun fever.”

Besides the general tightness and funkiness of “Gun Fever’s” production, the song is an obvious standout on the 17-track album, given it’s more directed subject matter. The track also offers up a nice example of how digestible Hiero’s short verse format can be: packed with five appearances the track doesn’t end up feeling long-winded or too quickly revolving either. Truthfully, Hiero doesn’t get too deep into the political debate at hand, but they paint a scarily accurate picture of the often-untold gun violence in this country (aside from the sensationalized mass killings, all members seem to point back to the type of inner-city violence that all too often fails to make headlines). Souls Of Mischief member’s Tajai’s verse works particularly well mostly due to his voice and flow fitting so well on top of the beat, and despite the Iraq reference, Taj is clearly rapping about cities like his own Oakland: “Come visit man, it’s real Iraq / Just had to wield my ratchet just to build my racket / These youngsters ain’t asking, they running up and they clacking / Assassins gassing, hey you’re gasping for your last one.” The ever paranoid Del The Funky Homosapien couldn’t be more justified in his fears of gun violence with his final verse: “Seeing this vicious cycle in my vision / Keeps me suspicious of passerbys and citizens / People pack pistols in their pocket for protection from predators / You never know when they might set it off.”

Later, Hiero flip the notion of “work” (in either a cliche drug reference or a sexually vulgar brag) into their own celebration of successful merchandising, chanting “Clocking that merch / Stocking that merch / Rocking that merch / We got that merch.” While it is slightly tongue in cheek throughout, the song, which belongs solely to Hieroglyphics member Pep Love vocally, also offers up a true glimpse at an artist’s financial grind: “I got my own, I got my crew too / Sweatshirts, stickers and hats is what the booth do / For my true blues we bringing good news / And you can get it from us, I thought you knew.” Given the ubiquity of the group’s third-eye equipped logo, a track about selling t-shirts isn’t stale or forced either.

Ultimately, The Kitchen is a fun, easy listen. Given the laid-back, summery vibe and our own current weather, it acts as a great, mostly carefree release for the warmer months. Throughout, the sound is reliably smooth, both in the use of Soul and Funk samples as well as in the production’s execution. The addition of the five-man Sacramento DJ crew actually ends up lightening the album’s feel—a couple random interludes littered throughout don’t hurt either—rather than overloading it with yet another cast of characters. And while Hiero aren’t exactly reinventing the wheel here, their constant relatability (hearing Casual rap about his girlfriend’s annoyance with his Madden playing on “All As Above So Below” will soon be memorized by droves) and unforgiving passion are hard to knock