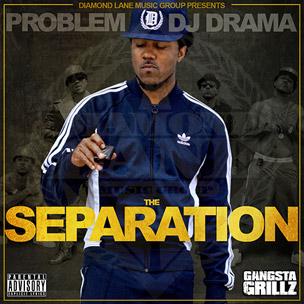 Though his name may not ring out with the same notoriety as say a Kendrick Lamar or a Game, Compton rapper Problem has quietly been earning his own stripes for some time now. A behind the scenes contributor on Snoop Dogg’s 2008 album Ego Trippin’ who subsequently forged a commendable stint with Universal Records, Problem has since built a strong independent presence with Diamond Lane Music Group. With his latest mixtape, The Separation, he looks to extend his magnitude on his own accord.

It’s clear Problem has establish himself with good company over the last few years, with guests like Wale, Wiz Khalifa and T.I. breaking bread alongside the west coast rapper here. On the latter record, which also includes a mouthy Snoop Dogg, Problem comes through with an exemplary stoner’s anthem in “Roll Up.” He stays on the melodic side throughout the tape, with the sensuous vibes of “On Deck” and the motivational musings heard on “The Beginning” providing some variety in his repertoire. Sitting on the cusp of greatness, Problem reminds listeners of his journey when he raps, “When the mils’ come, I will switch / Real niggas say real shit / I ain’t got shit to hide from / I’m from Compton, they already said I’d die young.”

While the bulk of The Separation keeps things interesting (the mixtape runs 20 songs deep), Problem’s biggest flaw is his unwillingness to make lyrics a significant factor in his music, and he recently explained as much to HipHopDX, saying, “I’ve never been that deep, I just do the songs and have fun”. His awareness is respectable, but it doesn’t justify courting records that feel inadequate. “Bang Bang” does little outside of its catchy one-line hook, while “Made A Mil Before The Summer” is as shallow as the title would suggest. Bordering crude and unnecessary with “Get Naked,” you’d expect the crass sentiment of Tyga to show up; that inevitably occurs on “Do It.”

The Separation is an entertainingly mindless project that boasts just enough Left Coast flavor without falling on the formulaic side. Problem will likely find traction with “Like Whaaat” (which has already been co-signed by Diddy and his ‘Diddy Jet Dance’) and “Bout Mine,” but until he makes a jump lyrically, he’ll continue to be recognized as a role player instead of the star that he could be.