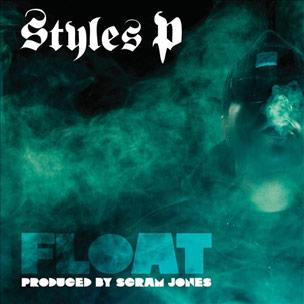 Since his 2002 solo debut, A Gangster And A Gentleman, in addition to his time with The Lox and D-Block, Styles P has been an undeniable model of consistency, superiority and respect among New York’s lyrical elite. Among today’s so-called “punch line” rappers, P’s influence is well documented. Now, at five solo albums deep, Styles P continues his run of quality releases with Float, a 12-song offering where he doesn’t stray too far from his blueprint of no-nonsense NYC Hip Hop, but which also sees the Yonkers emcee loosening his belt just a tad.

The beginning of Float is comparable to a psychological thriller told from a killer’s point of view right after they’ve committed their latest indiscretion: ominous and arrogantly threatening but intriguing and hard to turn away from. P intricately intersects his raspy bars tightly around Scram Jones’ dense, bristling drums on both “Manson Murder” featuring N.O.R.E. and “Bodies In The Basement.” The latter is the more expertly constructed song, as P feeds off of Jones’ brutal bass through his playfully insolent rhymes, spitting, “Cocaine, red rum, heroin, automatic gun / Watch the led come, twerking money then spread some / Nigga you’d die if you’d try me / Warner Brother, my gun is Def Jam, Joey i.e…”

And with his years and heavy stock in the game, “Pinero” is well aware of the fact that razor-sharp, stinging one-liners like that are his true bread and butter. So he sticks to the script throughout Float. The only place where he’s seemingly one-upped lyrically is by long time Lox/D-Block brethren Sheek Louch on “Hater Love.” It’s a slice of vintage back-and-forth family competition, suggestive of the sibling rivalry-driven rhyme patterns found on “One More Step” between Styles and Jadakiss. Further along, P actually does link with ‘Kiss on the clapped-up yet festive lead single “Red Eye.” And on one of the LP’s most stellar moments, the inevitable continuance of the Wu Block saga takes center stage as Raekwon lends a few banging bars to the neck-snapping swiftness and masterfully executed cuts and scratches of “Reckless.”

The best part of Float is that Styles P sounds like he’s having a blast on just about every single track; you can almost see him in the booth deviously smirking to himself as he plots his next set of stanzas and effortlessly dusts off his competition. But what’s new on this latest go-round is a certain bounce and revelry that was not as outright. And P energetically meshes them with his skillful wordplay and sinister subject matter. He lets his seemingly impenetrable gangster guard down just slightly, and subsequently the music takes a deceptively upbeat tone without sounding cookie-cutter or frail. The formula is most plainly evident in the second half on “Shoot U Down,” where all of the elements compliment each other: P’s earnest and hood-refined lyricism, coupled with Jones’ chopped up, pounding, soul-sampled hook almost makes the song sound hopeful.

But things hit a snag right before the midway point of P’s latest. He and Scram Jones fall into the trap of the all too familiar sped up sample on “Take It Back,” (here Scram borrows Frank Stallone’s hit of the same name) which walks a fine line between almost respectable and uninterestingly bland. The same goes for the unnecessary skit “Haze vs. Sour.” And “I Need Weed” may get some heads nodding in a few clubs, but severely pales in comparison to one of P’s most well-loved classics on the same subject, “Good Times (I Get High).”

With Float, Styles P shows that he’s not afraid to step outside of his gritty NYC lyrical gangster boundaries and be a bit more lighthearted. Though not his greatest body of work, it places his cunning lyrical skills front and center while showcasing his and Scram Jones’ identical ears for quality, bass-heavy production and the fact that gangsters want to have a little fun, too.