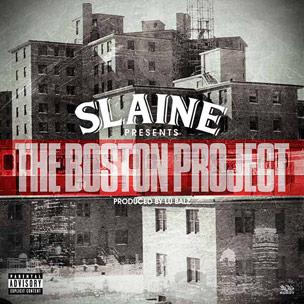 With hopes of giving back to Boston, Massachusetts, Slaine set out to make a statement. On The Boston Project, Slaine has taken the spotlight off of himself. This highly anticipated Slaine album comes with many features, perhaps more than some fans may have wanted. In a statement, Slaine explained his goal with this album.

“I wanted to create a record that highlights what this city has to offer musically and show how diverse the talent is,” he said. “This record embodies something much larger than just a Slaine record.” Knowing this, fans should be warned not to expect too much of Slaine the soloist on the project.

Still, Slaine shines when he makes an appearance. He also further explains why this album means so much to him. “My story ain’t a fairytale, it’s really real,” he rhymes on “Evolution Of The Kid.” “Ain’t had a chance, I had nothing I could barely feel / All’s I had was these neighborhoods I know very well…” This type of vulnerability is refreshing from Slaine, more of which can be found on “Zombie Land,” where he describes being six years old while finding “dope bags” in “mommy’s hand.” More introspection lies in “Hero.” Behind a hook that says, “The kids, they want to be like me now / But they don’t know the madness inside of me…” Slaine admits that he’s “never seen a clean week” after “20 years of getting high.” But despite any such madness, his leadership as an emcee on The Boston Project shows peers look up to him too.

His collaborators end up bringing versatility to the project. For instance, “Cake, Money, Jones” is a solid, hard-hitting, traditional boom-bap styled track with Ea$y Money and Chilla Jones providing quality verses. Jones stands out with punches stating he’s “on point off top like a sky scraper.” “Nothin’ But Business” is also a highlight with an infectious bounce and hook to match. “Buildin’ With Edo” is another gem, this one finding Ego G on a solo cut. “Loyalty” is yet another bright spot about friendships and deception that many can relate to. With all of these guests, perhaps the only criticism that can be made is that the album lacks cohesion and consistency at times (example, “Bad Guy”). But that tends to happen with so many features on one project.

Still, for the most part, The Boston Project is a solid album with versatility that does what Slaine set out to do: represent Boston Hip Hop in a positive light. “They said I’d never make it,” he rhymes on “Back Where I’m From.” “Disagreed with ‘em / All the doubt they threw at him was really only feedin’ ‘em.” That type of hunger is still apparent on this album and that type of hunger is likely why Slaine has become a known, respected emcee and a budding Hollywood star. With The Boston Project, he may have given up some of his own shine but he has also managed to bring the spotlight to Boston.