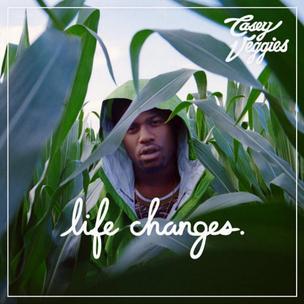 A key figure in California’s modern resurgence, Casey Veggies has chased his Rap dream throughout his adolescence with a determination featured on MTV during the season of his 2011 high school graduation. While he keeps close quarters with Odd Future, he has deviated from their aggression and sprouted into a local icon, catering to the teenage generation that flocks to emulate his confidence and trendsetting sense of style. Steadily climbing up the ladder in pursuit of top billing, Life Changes is Casey’s latest opportunity to shine his light.

As he grows into adulthood and stardom under the public’s watchful eye, Life Changes captures Casey Veggies and his cool, calm and collected demeanor that is prideful of his accomplishments without becoming obnoxious. Celebrating luxury and the spoils that go hand in hand with prosperity, “Young Winners” and “My Vision” offer a glimpse into glamour that listeners will find exciting to behold and inspiring given Casey’s motivation towards achievement. Though women and money dominate the majority of the topic material, the album distinguishes him as a self-defined leader, barely relying on guest appearances aside from the similar aesthetic of Dom Kennedy on “She In My Car” and crooner BJ The Chicago Kid on “Ulterior Motives.”

The smoothed out “Whip It” and “Life$tyle” contrast the turned up “Everything Wavy,” different depictions of former imagination turned boastful reality, as Casey has gradually perfected his youth oriented sound over time. Departures from swagger are the romantic “I Love Me Some You” (yet another addition to producer Harry Fraud’s hot streak) and the mature “Take My Life” where he shows appreciation for all of his journey’s strides. Despite conceptual limitations, Casey Veggies has progressed musically with Life Changes glorifying success in a fun manner, making it easy to root for his continual development where his peer group often goes scorned.