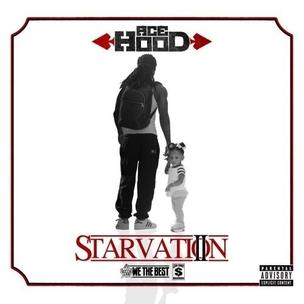 Given the fact that Ace Hood has released three albums and a dozen mixtapes within the last five years, the Florida-native hasn’t quite piqued the interest that many of his contemporaries have garnered in that same time span. His work ethic alone has kept him a relevant fixture, but with many other younger talents emerging, one has to wonder if there even is a breakthrough in sight. At a hefty 19 tracks, Starvation II is another missed opportunity for the 24-year-old rapper to separate himself from the pack.

Ace Hood’s presence on the microphone has been an issue in the past, and tracks such as “Take Yo Bitch” and “On Right Now” do little to shed this stigma. With Antoine in full creep mode, the former record sounds like an amalgam of cliché themes used to describe a wild night. “Lil Nigga (Interlude)” starts off promising as Ace goes into storytelling mode about the pressures that come with being a teenager in the ghetto. However, it similarly takes a turn for the generic. Sure, you could call the tragic ending realistic, but other rappers have tackled the same subject with substantially superior results.

Holding court alongside Rap’s human rolodex in DJ Khaled, you would think the guest list for Starvation II would be loaded with big names. By stark contrast, what’s presented instead is a questionable lineup that rarely benefits his cause. Coke Boys’ own French Montana makes two hook appearances, both as forgettable as the next. Meek Mill follows suit on “It’s Going Down,” with Ace Hood creatively hitting a wall with his metaphors (“Millionaire nigga, I got diamonds on my dick,” “Might just buy your chick and give her that dick filet for dinner”). And then there’s the case of Plies, who somehow manages to set today’s society back with 12 bars of unfiltered chaos on “Got Damn.” Granted, the guests on a project shouldn’t make or break the prosperity of the headlining artist; however, Ace Hood could have rationally made some progress with the right assistance.

If the listener is able to sift through the cluttered track list, they may discover a record or two that holds some semblance of value. “Why” is a reflective piece of Ace Hood’s soul as he ponders the events of his life, while “Art of Deception” captures the striking narrative of a damaged woman (“Love found in the wrong place / Self-esteem at its lowest rate / Mama gone, fuck her whereabouts / Plenty sold dreams, men in and out“). Ace Hood’s other favorable cuts stay in the realm of thoughtfulness, though “Root of Evil” is a worthy track to get turnt up on.

“I’m here to let you know Ace Hood is one of the best in the game. And if you don’t think so, fuck you,” DJ Khaled contemptuously shouts on “Dec 31st.” It’s good to know Ace has full support from his label head, because frankly there’s very few who would agree with the above statement. With Starvation II, Ace Hood is no closer to success than he was with his last release, or his other last release for that matter.