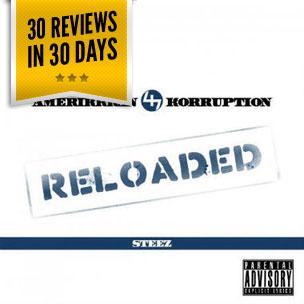 “Survival Tactics” launched 17-year-old Flatbush rapper Joey Bada$$ onto the Rap map when it dropped at the start of this year, but (whisper it) it was his Pro Era lieutenant Capital STEEZ who slayed the song. Rocking a deeper brogue and a composed flow, STEEZ was the one talking about stocking up on his arsenal before the ever-impending Doomsday, hollering anti-censorship sentiments, and sliding a coy dis Lil B’s way (“tell the Based God don’t quit his day job”). STEEZ then released his great AmeriKKKan Korruption mixtape, but despite its earlier release date, the project was overshadowed by the anticipation surrounding Bada$$’s own 1999. Now with Pro Era’s stock still rising, it’s been re-released as AmeriKKKan Korruption Reloaded and bulked out with seven extra cuts.

The body of AmeriKKKan Korruption still stands up. Like Bada$$, STEEZ’s raps are proud to broadcast from Brooklyn, and he rhymes over a chunk of underground indie rap: On “Vibe Ratings” he’s “coming live from Flatbush Junction” over Atmosphere’s “Sound Is Vibration,” while the tape’s jump-off song, “Capital STEEZ,” has him throwing in references to taking the L train into Manhattan over Madvillain’s “All Caps.” STEEZ’s raps are also shot through with a strain of weed-induced paranoia and a rebellious streak. “Free The Robots” has him musing on worldly events through the filter of the media while the aforesaid “Capital STEEZ” has what could be his calling card when he defines himself as a “class clown found it funny to correct my teachers/ I stand proud but I never said my pledge allegiance.”

This vibe continues for 14 tracks, until you reach the seven new songs pasted on to the end of the mixtape. And it’s here that the project abruptly severs itself while also nodding to the future. The fresh songs, sparked by the Joey Bada$$-crafted “Evol Love,” are more heavily produced by the Pro Era ranks and take on a stark and experimental twang. The beats veer towards the minimal, particularly with Kirk Knight’s spacey “Herban Man.” As a top-to-toe listen, the extra additions splinter AmeriKKKan Korruption rather than fortify it. But think of them as a separate seven-track EP and they’re a smart and distinctive indication of where Capital STEEZ is heading next, both as part of Pro Era and as a stand-alone artist.