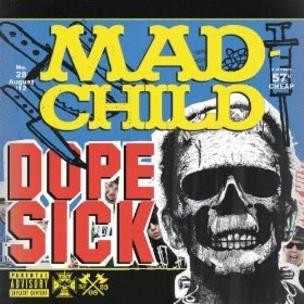 Literally and figuratively far removed from Drake’s endearing finesse rooted in Toronto, Vancouver’s Swollen Members have ruled Western Canada’s underground Hip Hop scene for over a decade. The group’s success with albums including Balance and Bad Dreams helped member Madchild’s self-owned label Battle Axe Records become a mid-2000’s independent staple that served as competition for the likes of Rawkus and Stones Throw. Still revered by long-term followers, Madchild emerges triumphant from years of tragedy with his first solo release Dope Sick. Madchild’s clear passion for creating songs aside, his overall sound and style are trapped in a box that is both outdated and potentially off-putting to unfamiliar ears. Barely for the faint of heart, his aggressive imagery, persona and complex flows tend to be overbearing whether sitting through demonic channeling on “Devil’s Rejects” or the hyper lyrical “Grenade Launcher.”

The strongest case for Dope Sick is its production, allowing selections such as “Monster” a chance despite the standoffish battle cry “Fuck a mainstream rapper” and similar alienating moments throughout the project. Presumably titled after the theme of surviving illness, Dope Sick allows Madchild to exorcise his troubled recent past as “Wake Up” details an Oxycodone painkiller addiction and “Jitters” toys with the idea of suicide, both discomforting though necessary for the artist’s progression. Overcoming these obstacles on “Judgment Day” makes it possible for the twisted “Dickhead” to place an upbeat spin on the life of a lewd degenerate while the album’s closer “Wanted” finds the protagonist sharing insecurities about getting his career back in order. As is the case with most beloved subterranean Rap acts, Madchild takes pride in making narrow-minded and polarizing art considered “real” to Hip Hop’s culture. Dope Sick ultimately becomes so caught up in pandering to this self-entitled niche audience that it neglects entertainment value and suffers due to its grating difficulties.