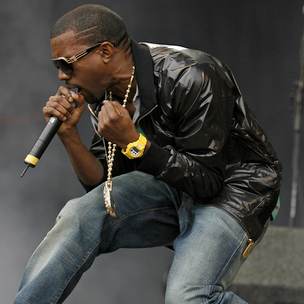 What If Rawkus Records Would Have Signed Kanye West?

I am a part of the Rawkus Records generation. From Dilated Peoples and Last Emperor to J-Live and Breeze Brewin, series like Soundbombing and Lyricist Lounge were deeply influential in helping a teenager who wasn’t from New York or Los Angeles feel like he was a part of something happening in real time with Hip Hop. After Death Row – which was more like following studio wrestling, Rawkus was the first label that it was easy for me to root for like a sports fan. On the strength of the reputation the label built with singles, compilations and early albums, I impulsively supported new-to-me acts like High & Mighty and DJ Spinna because they were delivered by a brand I could trust, and I was very rarely (read: Smut Peddlers) ever disappointed. Taking my weekly earnings from menial burger-flipping jobs, I purchased a Rawkus record bag and a t-shirt – cool things to do at the time. When their twelve-inch singles had promotional label stickers inside, it felt like a childhood cereal box prize. There were postcards in every CD, asking for information, questions about my taste, what I liked on the album and what I didn’t. The fanfare and community that the label built was amazing, and the same way that Talib, Mos and Hi-Tek‘s van waved Black Star flags in their “Definition” video, I waved flags for Rawkus – I too was standin’ on the rooftop with the Zulu gestapo.

Between the late ’90s and the later days was a pinnacle of greatness and penetrating the mainstream consciousness. A long slept-on Queens emcee in Pharoahe Monch made a mainstream smash in “Simon Says.” I remember sitting in a car one Friday night in October, 1999, and hearing the single on a mix show just outside of Cleveland, Ohio. Never in my life was I so eager for the deejay to run it back and play it again. At first, I wasn’t even sure who the artist was – dismissed from Organized Konfusion ever making it to Midwest radio. The beat, the chorus, the energy – it was of no surprise that the label on the single was that moonman-grim reaper-looking motherfucker. Deejays familiarizing themselves with that movement out of New York were soon hip to playing records like “Umi Says,” “Move Something” and “The Blast.” I can truly say that the soundtrack to my high school experience was Train of Thought by Reflection Eternal. In my opinion, it is the greatest album of the first 10 years of the ’00s for unadulterated Hip Hop culture, and everything that I personally feel is great about Rap music. Along with Loud Records, Rawkus was conquering the mainstream – and say what we will about that period after the ’90s, it still had its share of true school Rap on the radio – and Rawkus Records deserves as much credit as anybody for making that possible.

The moment did not last. By the time I actually started getting paid to write about Hip Hop – a job I simply started in hopes of getting free records by mail, Rawkus was changing. From what those who were there have told me, the label became less interested in taking chances on El-P’s unconventional production approach, and grew more persistent in getting recently-signed acts like Kool G Rap and Mad Skillz in the studio with Grammy Award-winning producers. I can’t say that I blame them, but El launched Def Jux Records (which seemingly adopted the early Rawkus mantra), and High & Mighty delved into Eastern Conference. Although Blacksmith was definitely a term heard at his shows, Kweli stuck behind as the last reminder of the glory days. The sharp-tongued Brooklyn emcee (along with Black Star brother Mos Def) carried out Rawkus’ beginnings into their major label era (leaving Priority distribution for MCA/Geffen).

The Pivotal Moment Of Talib Kweli’s “Get By”

Around that time, Talib found his biggest hit to date in what I firmly believe is one of the three greatest Rap singles of the last decade: 2002’s “Get By.” The uplifting anthem about shaking bad habits in the face of tough times featured a beautifully reworked sample from one of Kweli’s favorite artists: Nina Simone. That craftsmanship came courtesy of a buzzing producer named Kanye West. Although ‘Ye’s career had already yielded hits for Beanie Sigel and Jay-Z, the man’s work with Talib Kweli opened ears up to Kanye’s range, and perhaps best showcased his own tastes; the chemistry was strong. Moreover, the remix to “Get By” was an early opportunity to hear Kanye’s raps, which many did, after Jay-Z shocked the underground, by hopping on the song, in the beginning of his own Rap renaissance.

It’s funny that that happened, in hindsight.

In a December 2010 interview with VladTV, Talib Kweli said it himself: Kanye West wanted to be signed to Rawkus Records. At that time, Kanye was selling tracks to a range of artists, but the Chicago producer wanted people to hear what he had to say in the booth just as well. According to rumors, Rawkus A&R Ali S. delivered West’s demo to Brian and Jarrett, who were not interested. After all, in 2002, the label was developing a seven-figure comeback album from G Rap, a second Mos Def solo, and Kweli’s first major label-backed project in Quality. With Mad Skillz’ project tied up, and some critical and commercial falters with debuts from Da Beatminerz, Hi-Tek and Smut Peddlers, caution made sense. Less than two years later, West had it his way. The sound that he started experimenting on so well with Talib and others became the spine of his breakthrough, Grammy Award-winning debut.

Although Rawkus was around for five more years, the edge was lost. Kweli and Mos continued to work, and make albums, but anyone will tell you that the label magic was gone. The camaraderie was gone. That same thing that my peers and I felt we belonged to wasn’t possible anymore when it all got too big and boisterous. The same things we were rebelling from in the shiny suit era seemed to be happening here: Neptunes production, R&B choruses, etc. As soon as Talib fulfilled his contract, Rawkus crumbled like Wild Pitch, Tommy Boy and Fresh Records before them – quietly and sadly.

The label stays on my mind though. As Duck Down, Rhymesayers and Strange Music conquer the charts independently, I’m perplexed as to why Rawkus didn’t make it. If they has survived the storm, what could have been?

The Last Days Of Rawkus Records

One of the things that got me thinking was when last month, one of the final Rawkus artists, Mr. J Mederios (of The Procussions) released Saudade. The emcee dropped the project through his own label. In the dying breaths of the label, I was commissioned to write J’s bio during his 2006 Of Gods & Girls solo debut. I liked the project, but few people seemed to know what to do with it at the time. “Who was this guy using his government name?” asked one of my colleagues in an editorial meeting at the time – I guess my press bio wasn’t as sharp as it could have been. As I look at the uber-success of Kanye West, and the amazing art he creates with his equally-amazing budgets, would this have been him, had he indeed signed to the label? Without Jay-Z’s “Never Let Me Down” verse or the braggier elements of The College Dropout, would the Kanye contradictions (think Louis Vuitton backpacker) have been possible, let alone so alluring?

As a West fan to the fullest, I’d love to believe not. Still, label politics in the post-1995 Rap industry are a funny thing. It’s good that Kanye West signed to Roc-A-Fella. Of course it is. Kanye West made the label bigger than State Property, Roc La Familia and The Diplomats – and along with Jay-Z, he carried the diamond sign the farthest, a decade-plus deep into the new millennium.

Then I come back to Rawkus and wonder. The label’s buzzer-beater attempt was “The Rawkus 50.” Digitally – in a 2007 that could not have imagined Kendrick Lamar or Mac Miller shocking the charts with iTunes releases, the label put out 50 projects from an impressive list of would-be’s. How involved Rawkus actually was remains to be seen, but they fulfilled their feat – which is more than most promises of this kind made today. If you go back to that list of works, they include names like Laws, Finale, Grand Agent, L.E.G.A.C.Y., Dynas, and 6th Sense. These artists went on to make strong independent albums, produce major label singles, and even ink major label deals. The next three years will reveal the potential that Rawkus had, four years ago. And to their credit, Rawkus was there. They were also there for artists like Joell Ortiz (then as Jo-Ell Quickman) and Novel, plugging away. Before the term “blog” even existed, Rawkus’ tastemakers believed in would-be Internet stars, they just had no idea how to handle them.

As it took Ortiz years, and it’s still taking Novel time to regain ground in this industry, that could have easily become Kanye West, a guy unheard on a label gasping for air in a tough musical climate. And that sends the mind down even more paths. Without College Dropout, Late Registration or Graduation, what would Hip Hop even sound like right now? Where would Common be? Or Kid Cudi? What impact does “Jesus Walks” have if only 5,000 people geto hear it? How can you leave people on the edge of the seats at awards show if you’re not even invited?

The line in Hip Hop between fame and underground respect is thin. I am happy that Kanye West had a chance to reach a mainstream stage. What he did with it from there is a testament to himself. Rawkus delivered us stars, as seen in Talib Kweli and Mos Def’s prominence today – still biproducts of that era, as El-P, Cage and others are still highly-respected by audiences. It is amazing to think how the cards would have fallen should things have been any different, and a label that had some of the greatest impact on challenging the late ’90s status-quo of the industry deserves much more credit as the playing field is much more leveled today – at least at the marketplace.

Jake Paine is HipHopDX’s Editor-in-Chief. He has over nine years of professional journalism experience, and has written for XXL, The Source, Forbes, and the Pittsburgh Post Gazette. A native of the Steel City, Paine lives in Philadelphia.