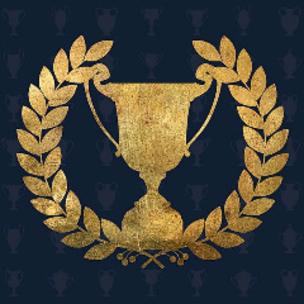 “Everybody want their trophy. What, is that supposed to tell me that you did something? I don’t need no goddamn trophy, or award, or recognition. I do this shit because I love to do this shit.” It is with this sentiment that Apollo Brown and O.C. chose to introduce their collaborative project, Trophies. With the tongue-in-cheek title in mind, Brown and O.C. go to work in a yeoman-like fashion.

Apollo Brown lays down a rich bass line and minimal keys as O.C. introduces the listener to a day in the life on “The Pursuit.” The cut has a mix that’s a bit dirty in just the right way, and on O.C.’s end, it’s just as vintage—it’s pure spit; he doesn’t even concern himself with rhyming on many of the bars. Powerful strings meander in the background on “Nautica,” which puts O.C.’s craftsmanship on full display: “Blowing through the city / Category five…I shows no pity / Hurricane winds, churning up fear / Boarded up houses brace for what’s here / Hundred-twenty mile winds with strength and gusto / Battin’ down the hatches, askin’ ‘what in the fuck fo?’” O.C. weaves these incredible visual tales of apocalypse and doom by impressively occupying the ample space left between Apollo Brown’s staccato keys and sparse percussion. The song is also a perfect illustration of just how well Apollo Brown and O.C. work in concert.

Certainly, Trophies isn’t without its flaws. The production on “The First” doesn’t seem to hit quite like it does on the rest of the album—the sample rings hollow, and is just too simple a loop. This is reflected in O.C.’s verses on the cut, which are less-than-inspired. It’s not glaringly bad, but is notably of lesser quality than much of the album On “People’s Champ,” the M.O.P. vocal samples don’t quite hit like one would hope, but otherwise, the cut succeeds by virtue of its sinister organs.

Complaints are minimal, however. “The Formula” perfectly marries O.C.’s nostalgia with beautiful violins, but perhaps the aptly-titled “Fantastic” is the piéce de résistance. Serving as the album’s outro, “Fantastic” recalls the choices O.C. made in his career (“Could’ve easily adapted to trends, chasin’ them ends / Which is today’s cardinal sin, start of the end”) in sadly short fashion. Clocking at just over two minutes, it is easily the strongest offering Apollo Brown makes on the entire project, with lovely nuances evolving throughout, culminating in an appropriate Bloodrock vocal sample.

As a whole, Trophies succeeds where albums by many ’90s vets fail. It’s made in the classic style that mashes the gritty and soulful, yet doesn’t sound dated. When you listen to O.C., he’s letting you know: “I’m from a place and time where this is how we rhymed, this is what we rhymed about, and this is how we get down.” But he’s aware that it’s 2012; that awareness allowed the two to record a project that recalls his roots, but applies them in a manner that is relevant today—both in terms of substance and execution.