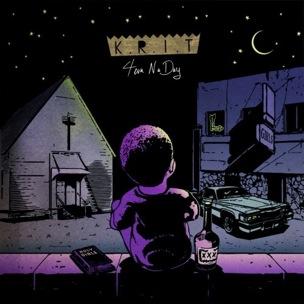 When Big K.R.I.T.’s Def Jam debut was set on the proverbial back burner last Fall due to sample clearances, the Meridian, Mississippi native took it upon himself to preserve his stature with one more mixtape before Live From The Underground surfaces this summer. Conceptually, 4Eva N A Day offers the listener a 24-hour window into his life, and in the process it displays an individual that is undoubtedly built for Hip Hop longevity.

For anyone worried about a sonic shift in Krizzle’s music need only turn to “Me And My Old School,” a syrupy ode that highlights the Southern car culture over a chopped and screwed sample. Reveling in his third coast upbringing, K.R.I.T. continues the celebration with “Country Rap Tunes.” Humble but proud, it’s clear that he is able to respectfully salute his predecessors while still solidifying his own status within the community. Of course, he doesn’t forget about his hard-working devotees in the gentlemen’s club either, with “Temptation” acting as an extension of what “Money On The Floor” capitalized on last year.

At 15 full tracks (17 if you include intro and a late interlude), 4Eva N A Day is a tight-knit project that also provides some of Big K.R.I.T.’s most potent lyricism to date. Tackling the issue of artistic integrity, “Handwriting” sends shots at label executives who smugly walk around like they’re urban tastemakers. Carrying this intensity over to “The Alarm,” K.R.I.T. candidly highlights the insecurities that hang over his crown. With his words supported by hollowed piano keys, cymbal snaps and a shrilled voice asking “do you believe?” the performance is as enlightening as it is cautionary. A subject only brushed upon in his past, “Red Eye” goes into the unraveling of a relationship that is faced with adversity. Lust, musical endeavors and humility are all tested, and the pain for both parties involved is palpable by the song’s closing. Aware of the inevitable end, K.R.I.T. admittedly raps;

With three impressive mixtapes in as many years, Big K.R.I.T. has raised the bar for his peers when it comes to consistency, depth of lyricism, and an overall will to succeed. To classify 4Eva N A Day as a circumstantial interlude to his debut would be an appalling understatement; whether it’s a mixtape, a production placement or a featured verse, K.R.I.T. has yet to disappoint. In that regard, Summer can’t come any sooner.