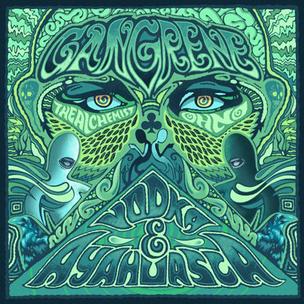 Gangrene is about as disgusting as Hip Hop gets – and that’s a high compliment. The second disturbed brainchild (not including Greneberg) of the Alchemist and Oh No, Vodka & Ayahuasca kicks off with a revolting sample of someone puking their guts up before segueing into “Gladiator Shit,”

a song that’s strung around a scuzzy guitar loop that threatens to molest your headphones. 40 minutes later the fantastically dirty session ends with the charmingly-titled “Livers For Sale,” which is underscored by a warped-but-sweet sample that brings to mind a beat the Supreme Clientele incarnation of Ghost Deini should be wailing over. Vodka & Ayahuasca is that gutter shit. Rejoice.

The unity of production, raps and sentiment causes this latest installment in the Gangrene series to impress so much. In the past, Oh No’s voice has been lost among meandering Madlib production. However, over the twisted, brutalized and at times perverted Alchemist beats here, he finally sounds like an emcee with gusto. And while Alchemist ain’t winning any white rapper cipher sessions any time soon, in tandem with Oh No, the duo’s raps mesh seamlessly with the music. Likewise, the obligatory featured spots are a snug fit for the vibe of the project – as they take in the gutter gallery roll call of Kool G Rap (on the aforementioned “Gladiator Shit”

might brag about sipping “the martini with the olive,” but still threatens to “bust chrome” and leave your “body rotted.” It’s pure thug poetry. If you’re not fucking with that guest list then there’s probably a frat rap pizza party with your name on it.

Underground Hip Hop in the right and literal sense of the term, Vodka & Ayahuasca is an uncompromising listen that dwells in the underbelly of an increasingly saccharine rap scene. It’s music not afraid to embrace the grubby and grimy side – it brings to mind the idea of two mad rap degenerates holing themselves up in a dank basement and embracing their disturbed inner thoughts. So bump it loud in your headphones, give yourself ear damage, and then laugh maniacally. 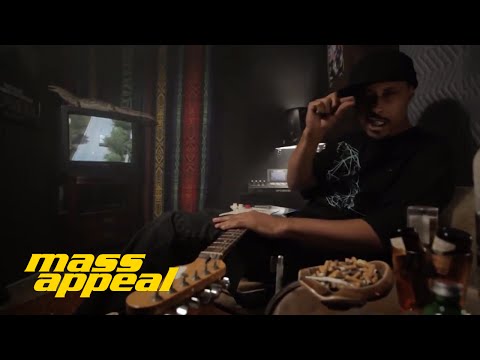