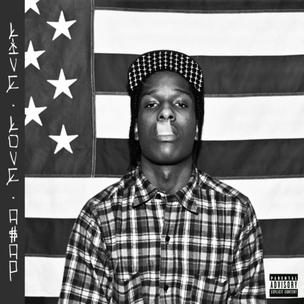 A$AP Rocky has already RSVP’d for his spot as the next big rapper out of NYC. After parlaying his online buzz into an alleged 3 million dollar deal with Polo Grounds/RCA, the first official project to spring forth from the alliance with his new benefactors is the Live.Love.A$AP mixtape. So long as you resist the urge to feed into the hypebeasting, that pretty motherfucker drops a solid opening salvo worth his couture clothes.

A$AP Rocky not being a Dipset clone meant an instant choir of dissenters dismissing him as a rap usurper, riffing on Houston’s swag for a gimmick, as soon as he was pegged as hot Hip Hop prospect. But a listen to his mixtape—if you missed his videos—reveals that he oozes Harlem bravado. It just so happens he and his A$AP crew see no problem delivering it through a purple haze that’s more homage than swagger jack. On the mixtape’s first track, “Palace,” he raps, “Don’t remember me as a wannabe New Orleans nigga, slash lean sipping Tennessee nigga, nah/Influenced by Houston, hear it in my music, a trill nigga to the truest show you how to do this.” Another clear inspiration on Rocky’s cadence is Bone Thugs-N-Harmony, which can be heard on the speedy rap flows flipped over bluesy organs on “Trilla” and throughout the mixtape.

Included on Live.Love.A$AP is “Pesos” one of the two songs that made the 23 year old such a commodity. The muffled drum kicks and spacey synths provided by ASAP Ty Beats made the tune a standout in the MC’s fledgling career. “Purple Swag” is the first song that got the A$AP Rocky chatter started revealed that the codeine sipping culture was part of his shtick as much as Alexander Wang tees and Mason Margiella kicks. However, the song is AWOL, with “Purple Swag: Chapter 2,” featuring Spaceghost Purp and ASAP Nast, and basically an extended version, in its place.

The mixtape’s grooves generally stay on the DJ Screw side of the BPMs and are provided by Rocky’s team of producers that include Clams Casino, ASAP Ty, and Spaceghost Purp. Clams Casino’s tracks are some of its best, including the ethereal “Wassup,” a track tailor made for enjoyment under the influence of whatever your drug of choice. Rocky kicks, “Only thing bigger than my ego is my mirror, clothes getting weirder, money getting longer, pretty nigga pin your hair up.” While plenty of songs stick to the styrofoam cup holding script (“Get Lit,” “Kissin’ Pink”), Rocky shows depth when he tackles topics like seeking wisdom from elders on “Houston Old Head” or reflecting on his come up on “Demons.”

Part of A$AP’s road to rap stardom has included co-signs from Drake and Jim Jones and on his debut mixtape he landed some esteemed features in Schoolboy Q (“Brand New Guy”) and Chace Infinite (“Keep It G”). However, he also gives his ASAP crew plenty of shine that could have better been used to assert his own talents. Live.Love.A$AP is a good sketch of what A$AP Rocky is about, and should have you looking forward to the bigger picture he’s capable of delivering.